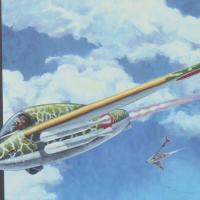 This could be classified as a “paper” airplane, since it only existed as a design. The project was initiated as a search for greater performance and alternative power sources. Germany provided assistance on the project and research progressed quickly and it is assumed that design of the Katsuodori took place in the middle of the war. The Katsuodori had a tailless fuselage with a sharply swept wing. The plane was to use four solid fuel rocket boosters to propel the aircraft to speed, and then switch on the ramjet propulsion system. The plane could use a droppable dolly for a land take-off or it was planned to be carried by a bomber with removable struts. When the Me163 design and production was complete, it killed further research on the Katsuodori, as the Me163 was a proven design, flying in Germany.

The kit actually comes with two complete models in the box. The model features recessed panel lines, a limited detailed cockpit and two interesting marking options. Molded in gray plastic, it is flash free, with no mold marks that would show. Fit is excellent, with only minimal filling needed in a couple of areas where the upper and lower sides meet.

As you can see from the sprue, this is not a lengthy or complicated build.

I decided to build the trolley mounted version with rocket boosters, so the bomber attachment struts are not shown. The cockpit detailing is very basic and plain, the control stick is very petite and the instrument panel has some raised details. The ramjet has a separate nose inlet and rear exhaust cone. The one piece canopy is very clear and thin. The wings are molded as one piece, with the vertical fins at the wingtip being separate. The rocket boosters are cast individually and feature hollow exhausts. There are two for each side, and there is a separate mounting bracket. The carrying dolly is made up from two pieces for the main frame, with two separate wheels. Decal options are both fictitious, as the aircraft never made it past the mockup stage, but they provide both an IJAAF and an IJN option. The decals look quite good and should pose no problem.

A very quick and satisfying build and I recommend this kit. Thanks to IPMS/USA and Meng Models for the opportunity to review it.