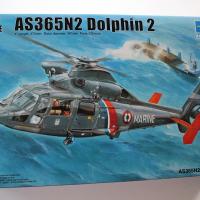 The Eurocopter SA 365/AS365 Dauphin 2 (Dolphin) is a medium-weight multipurpose twin-engine helicopter currently produced by Airbus Helicopters. It was originally developed and manufactured by French firm Aérospatiale, which was merged into the multinational Eurocopter company during the 1990s. Since entering production in 1975, the type has been in continuous production for more than 40 years. The intended successor to the Dauphin is the Airbus Helicopters H160, which is yet to enter operational service as of March 2015.[2]

The Dauphin 2 shares many similarities with the Aérospatiale SA 360, a commercially unsuccessful single-engine helicopter; however the twin-engine Dauphin 2 did meet with customer demands and has been operated by a wide variety of civil and military operators. Since the type's introduction in the 1970s, several major variations and specialized versions of the Dauphin 2 have been developed and entered production, including the military-oriented Eurocopter Panther, the air-sea rescue HH/MH-65 Dolphin, the Chinese-manufactured Harbin Z-9 and the modernized Eurocopter EC155.

The kit is produced by Trumpeter, a well-known company who has been producing very nicely detailed kits of Aircraft, Helicopters, Armor, and Ships in very colorful packaging. The box art work is outstanding! The scene depicts the Dolphin 2 in French Marine markings flying over a tanker ship in heavy seas.

The kit consists of 330 parts and comes on 13 gray sprues, 2 clear sprues, and 2 photo etch frets. The parts are very nicely molded with no flash what so ever. All panel lines are recessed and are very fine including the rivet and bolt details. All the sprues have small gates. The 16 page instruction sheet shows the suggested assembly through 20 steps starting with the cockpit / interior assembly, and progressing through the fuselage, engine and rotor, landing gear, and blade assembly. The clear sprue parts for the front windscreen and side windows are the appropriate thickness and fit exactly.

The kit fits together exceptionally well with no filler required to fill the seams. The exceptionally tight fit of the parts is both a great advantage and at the same time a hindrance. If you assemble a part/assembly a little out of tolerance it throws the mating part/assembly out of alignment. The assembly instructions need to be followed per the suggested assembly, if not you will need to back track and fix a miss-aligned part/assembly.

The assembly of the cockpit interior covers 1 through 6 of the 20 step instructions!

The assembly of the seats is very time consuming. The seats consist of the frame with a seat bottom and seat back cushion with photo etch seat belts. They all need to be painted separately and then assembled. There are 13 seats in total.

The next instructions 7 through 10 are to install all the cockpit glass in the fuselage halves. I choose to skip this step except for the installation of the lower front glass on both the pilot and copilot sides. Parts S1 and S2 need to be installed from the inside before the installation of the cockpit and sealing together of the fuselage halves. If they are not installed at this step it will be very difficult to install them later.

Instruction 11 is to assemble and install the tail rotor in a fuselage halve. The tail rotor is nicely detailed! Next the cockpit is installed and the fuselage halves are joined together. I had a problem with installing the cockpit. The instrument panel/radar is slightly larger than the inside dimension allowed when fitting the two halves together. I had to trim and shape the instrument panel/radar dome to get the fuselage halves to seal. Also since the forward cockpit is all glass the frames are very delicate. I broke the frames in at least two locations while getting the cockpit to fit. Also the overhead instrument consul has to be glued to the roof bulkhead to get the cockpit frame bulkhead to fit at the correct angle.

Instruction 12 is the assembly of the twin turbine engines. These have to be the most detailed jet turbines engines I have seen. It is a shame that once installed they wont even be seen if the engine panels are installed closed. One piece of information lacking at this step is the painting instructions. I looked at some Google images of turbine engines and painted them accordingly.

Instruction 13 is the assembly of the rotor head and transmission. This is again one of the most detailed rotor heads I have seen and once again when installed very little will be seen. This step is also lacking painting instructions so again I consulted Google images for color.

Instruction 16 is the installation of the rotor head/turbine engine fairings around the rotor head and engine. I chose to leave the engine panels B2 and B12 off so that I could pose them in the open position so the turbine engines could be seen.

Instruction 17 is the installation of the tail planes. I chose to assemble the tail planes parts B17 and C21 for the starboard side and B13 and C43 for the port side and leave them off until the final assemble since they would be painted international orange.

Instruction 18 is the assembly and installation of the radar dome. The dome can be installed in the closed position or in the open position. I chose to install it in the closed position. Also when looking at Google images of the French Marine Dolphin 2 I noticed that the exterior of the radar dome was painted matt black and the interior was painted a sand color. This is not called out in the instructions. I chose to match the paint color to the Google images.

Instruction 20 is the installation of the rotor blades. I painted them matt black per the separate painting and marking guide.

I finished the assembly by installing the remaining cockpit glass, antennas, grab handles, and door fairings. I left the windshield wipers off until after the exterior painting and decaling was completed.

Weight must be added to the nose or the helicopter is a tail sitter. I added about 2 grams of weight to the nose cone.

There is a separate Painting & Marking Guide provided for the exterior of the Dolphin 2. The exterior paint colors are called out using Mr. Hobby, Vallejo, Model Master, Tamiya, and Humbrol paints. The exterior color of the French Marine Dolphin 2 is Dark Sea Grey with International Orange panels and tail planes. I chose to use the Model Master paints.

There is only 1 marking option provided. It is for a French Marine Dolphin 2 but no squadron markings were provided. The decals are thin and are printed within margin. The decals lay down with no problems and there is no silvering. What is disappointing about the decal set is that the lettering is totally unreadable for the open/close stencils, and directional arrows. There is very little as supplied for stencils and what is supplied is unreadable. I would recommend using an after marking set of stencils for every decal other that the supplied French Marine Markings.

Overall the kit is a joy to build and builds into a handsome French Marine Dolphin 2! If you are looking for a highly detailed large helicopter kit, this is it! The fit is exceptional, the instructions are logical but must be followed exactly.

My thanks to Trumpeter, Stevens International, and IPMS USA for the opportunity to build this great kit. I look forward to building more Trumpeter kits in the future.