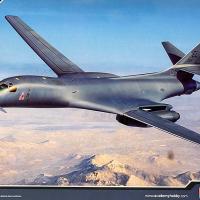 Academy Model Kits is adding to their 1/144th scale bomber fleet with the addition of a Rockwell B-1B Lancer. Academy's previous foray in 1/144th scale aircraft kits was with a B-47 kit. This B-1B is the sixth, depending on how you count them, 1/144th scale B-1. Lindberg, Minicraft, Panda/Dragon, Monogram, and Revell have all had offerings of this aircraft in this scale.

However, Academy's 'Bone' is newly-tooled and molded in multiple colors of plastic so it can be built without the use of paint. The fuselage and other aircraft parts all molded in gray, with the landing gear in white plastic, and the wheels and engine exhaust nozzles in black. (Operational B-1's are overall gunship gray with white wheel wells and ordnance bays.)

Other features of this kit include a two-place flight deck, wings that will pivot into one of four positions, positional weapons bay doors with two types of bombs (JDAM's & Iron Bombs) and an auxiliary fuel cell, positionable landing gear, optional Sniper XR pod with fuselage pylon, and pre-cut paint masks for the clear windscreen. [Technical Note: B-1 aircraft feature tinted (yellowish gray) windows.]

The three marking options, printed by Cartograf, are:

[Shameless Plug: The only other 1/144th scale marking options, that I am familiar with, are available from Caracal Models.]

The model goes together beautifully with many of the sprue attached points hidden behind another part. The wings are slide-molded as one piece, as is the tail assemble with few if any of those pesky seams to deal with. (The tail assemble part has molded-on vortex generators.)

Academy has also included some nice detail with regard to the engine intakes. The intake trunking is provided as three separate parts that do a wonderful job of replicating that detail. Additionally, the exhaust nozzles are molded with exposed 'turkey feathers' and correct flame holders. And remember, all of this assembly can be achieved without the benefit of an adhesive. Pretty cool engineering!

Now if you're thinking...Eww! Snap kit! Get this abomination away from me! Think again. This 1/144th scale B-1B from Academy has more refined, molded detail and better parts fit than any other kit of the B-1 that I have examined or built, in any scale.

The excellent instruction booklet shows pictographs of the assembly process and comes as two separate booklets. Which begs the question, why two booklets? My sarcastic side likes to think that SOMEONE in the graphics department got everything put together and as they were was putting the final touches on the kit realized that there was just something missing. In reality, it’s probably a lot less dramatic. But it is always a good thing to double check ones work as Manual 2 has the final assembly steps, markings, and painting guides.

The landing gear and ordnance bays can be shown either open or closed. Academy thoughtfully provides separate, one-piece parts (gear /ordnance bay doors) for each should you select the option of closing things up. Conversely, should you model your 'Bone' with the wheels and weapons bays open, Academy has included individual parts for that option. It should be noted that the detail inside the various bays will give you pause if your thinking to 'button everything up'.

Another nice feature of this kit is the pose-able wings, either swept or extended. Academy provides separate parts for the glove area immediately behind each wing for either configuration. [Model Tip# 6372: Attach the wings BEFORE you glue the fuselage halves together.] The overall parts count is relatively small and all of them go together swell without the need for filler.

Another swell aspect of this kit are the wonderful decals from Cartograf.. The selection is quite extensive and more than one would ever expect even from a larger scaled model. As an example, Academy provides the stenciling for the forward gear strut. Oh, and they go on just as you would hope, nice and easy. The silvering on the wing walkways was a function of my poor skill set.

The only clear bit in this kit is the canopy which fits snugly. I sprayed the inside with a mixture of clear amber and smoke gray to replicate the tinting common to the type. A better choice might be to use clear yellow in lieu of the amber. Academy does provide some pre-cut masks for the canopy. Alert readers may note that the canopy framing isn't painted. I put those pre-cut canopy masks in a safe place before I started building the kit and, as yet, haven't rediscover my 'safe place'. [Model Tip# 666: Don't be too clever about selecting a place to keep kits parts safe until needed.]

This 1/144th scale B-1B Lancer from Academy is a wonderful model. With the ease of assemble, fit of the parts, and finesse of the moldings it deserves to be in the running for best kit in any scale. My thanks to Academy and IPMS/USA for the review copy.