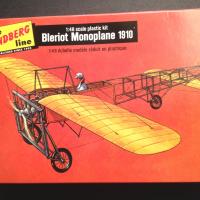 On July 25, 1909 Louis Bleriot assembled a tiny monoplane of his own design on a farm in Les Baraques, France. Weighing in at 500 lbs. and powered by a 25 HP Anzani three cylinder motorcycle engine, the airplane was the picture of utility. Still limping from a recent crash (one of many Bleriot had) he climbed into the monoplane after a short warm up flight and set out across the English Channel. 37 ½ minutes later flying at speeds up to 42 mph per hour at an altitude of 260 feet, Bleriot spotted the white cliffs of Dover and threaded his way through a gap in them to crash land on English soil. His goal in accomplishing this feat was not the prize money that totaled 20,000 dollars, but Bleriot wanted to sell airplanes and did he ever. As a result of the fame gained from the channel crossing, Bleriot would go on to build about 250 model XIs. The model XI used what are now a convention for aircraft control, the basic stick for roll and pitch and a rudder bar for yaw. Wing warping was employed in lieu of ailerons as Bleriot had figured out how to make that system work. The culmination of these design elements resulted in a very stable easy to fly design. As a result, the Model XI was used through WWI as trainer aircraft. A short winged version was used to teach ground control.

The aircraft, in this kit, is not the famous Channel crossing Model XI of Bleriot. It instead represents a Model XI of 1910 based at Hendon aerodrome in London used for pilot training. The box art doesn’t portray the actual model in the box. The kit has a tailskid instead of a tail wheel. The advantage of the skid became apparent on landing in an airplane with no brakes! There are 31 parts molded in a crème colored plastic. The casting is pretty good considering the age of the kit. I remember these when I was a kid, but never tried them fearing the rigging clearly shown in the illustrations. I was surprised by the quality of some of the parts, in particular the engine and the surface detail of the wings. Pilot figures are something I’ve always liked and this kit has a rather dashing chap complete with a mustache. As if that wasn’t enough, this kit and the other three in the series come with a small puzzle featuring the box art. The instructions are a single double-sided sheet that includes a paint chart, but no specific brands are specified. There is no rigging diagram so you’ll need references if you intend to wire up your model.

Assembly begins with the cockpit, which, like the real thing, is very simple. Of interest is the way Lindberg engineered the structure of the fuselage. The rear portion of the fuselage is an open box structure. The top and bottom of the fuselage parts are molded with the cross braces connected by a thinner section of plastic that is removed after the cement sets. This worked well for the most part. A few of the joints broke loose when I cut them out. I found two challenges in this kit. The first was how to represent the clear-doped linen covering of the flying surfaces and the fuselage. Reference photos showed that these areas were more translucent then I’ve seen in other fabric-covered aircraft. I decided to draw the structure of the underlying frames and then build up the surface color to the point you could see through it. I used Testors “wood” color for the structure and Humbrol 103 for the fabric. The second challenge was of course how to rig this thing. Instead of prerigging the controls and fighting the loose lines during the rest of the construction, I choose to rig the completed kit. Not every line on the real thing is captured on this model. I made sure to connect all the flying wires and the bracing wires in the open box structure. If there’s a low point in this kit, it’s the wheels. Like a lot of aircraft from this era, the wheels were open spooked bicycle type tires. The kit parts are cast solid with some raised spokes on the surface. The instructions would have you paint the background black and the spokes silver. I decided to paint them linen color to hopefully make them fade into the model. Some nice photo etch wheels (if there is such a thing) could really dress this kit up. Finally, the rigging was done with 4lb test monofilament fishing line passed through a black sharpie. No predrilling was used, except the wings that are predrilled out of the box.

This is a cool little kit when you consider how long it’s been around. The level of detail is actually very good. The suggested age group is 10 years and up. That’s a bit ambitious considering the complex and fragile nature of the fuselage and the rigging needed to make it look right. I would give it a nine out of ten because of the solid molded wheel spokes. The puzzle was a nice bonus. I assembled it with my daughter while we talked about the history of the subject. The best part of this project was realizing the bravery of those early aviation pioneers who hopped into these delicate craft and took to the skies. We owe a debt of gratitude to them all.

Thank you to Round 2 models for redistributing this kit and to the IPMS review team for letting me share it with you.