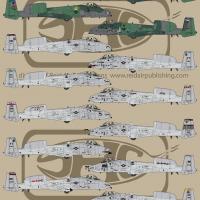 Speed Hunter Graphics is a part of the Reid Air Publications family and that means Jake Melampy whose owner as wells as chief cook and bottle washer. That’s a great thing for all of us who love the wonderful A-10 Thunderbolt II. I have had a love affair with this plane since I first saw one fly in an air show here in Cleve. Anything but sleek, it is a workmanlike flying tank whose appearance may be different but it also the last thing you would ever want to see if you are in an armored vehicle on the wrong side and it’s the best thing to see if you are looking for close air support.

Enough of the love fest, Speed Hunter has released a set for the Trumpeter 1/32nd A-10. This is a massive set with decals for fourteen planes. There are enough decals in the set for two complete planes- one in the Euro 1 paint scheme and one in the two-tone gray. Also included are markings for the ejection seat as well as the litening pod. Inside the package, there are two large decals sheets. One is full color and one is black and white. Both are extremely well printed with prefect registration and they are made by Cartograf which is a great choice for making decals. Also included are four full color pages with extensive notes and profiles in color for each aircraft.

The planes included are:

Let’s take a look at one of the planes as an example, and one which is near and dear to Speed Hunter Graphics. Plane 78-0633 was stationed in Turkey in 2016. As part of the description, there are very notes about antennas and the moustache decal which get centered on the nose. In actuality, Reid Air Publications and Speed Hunter were asked to design the graphics for this plane and several others and actually had the company logo on the side of several GBU-31 JDAM’s which were dropped on ISIS. So, the Speed hunter logo is included for your JDAM’s. This level of detail exists for every one of the thirteen other planes included. And with the detail included in the Reid Air Publications books, the research on these decals is at the same high level.

This is a great set of markings for the big A-10 with both the Euro 1 and Gray options. Well researched, printed by Cartograf and with tons of options, this set needs to be there for the A-10 build you all want to do. Highly recommended!

My thanks to Jake Melampy, Speed Hunter Graphics and Reid Air for the change to dress up that A-10 that has been sitting on the shelf for many years.

Cover page of the instructions

Black and white decal sheet by Cartograf
Previous Next