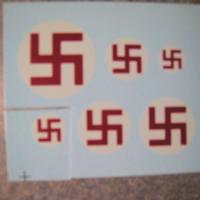 Latvia, a small Baltic republic, developed an air force in the twenties, and adopted a striking insignia of a red swastika ( no relation to the German version) on a white circular background. Aircraft operated with this insignia in place up until the outbreak of World War II, Many of their aircraft were imported from Britain, including Hawker Hinds, Bristol Bulldogs, and Gloster Gladiators. In 1940, Latvia was invaded by the Soviet Union, and all surviving Latvian military aircraft were captured by the Russians. Any aircraft that remained were later probably destroyed by the Germans.

Croco is a Latvian group that produces resin kits of unusual aircraft, and they produce their own decal sheets. Since there are very few Latvian military aircraft decals produced, Croco had begun producing a very nice little sheet of aircraft insignias, consisting of white disks with the Latvian swastika markings. When I received a Croco resin kit of the Yakovlev UT-3 twin engine trainer, for review, the IPMS representative, Bill O’Malley, I was surprised that he also included the Croco Latvian decal sheet. I was impressed to the point that I brought an old Airfix Hawker Demon out of my stash, and suitably equipped with the engine and modified propeller from an old Gloster Gladiator kit, I constructed a Hawker Hind, powered by a Bristol Mercury IX radial engine. After completing the model and painting it, I applied the decals, and was very impressed with their quality. They required no trimming, and adhered closely to the surface of the model. I added a coat of Micro Set, and the decals flattened down very nicely. A thin coat of Glosscote finished the job, and the result was a very nice model of a historic aircraft.

In keeping with Croco traditions, there are no instructions accompanying this decal set. All you get are the decals. However, that is not a problem.

I wasn’t aware of the existence of this decal sheet until Bill O’Malley included it in some of the material he sent me for review, and I am thankful that he sent it, as I always like to build another variant of the Airfix Hawker Hart/Demon series. I have about a dozen of them so far, and they are one of my favorite airplanes. The Latvian version is extremely colorful, even in camouflage, and this decal sheet will allow me to build another Latvian plane, probably an Airfix Bristol Bulldog. If you can find one of these sets, certainly get one or two. They can’t be very expensive, and the models will look very nice on your shelf. There is plenty of information on Latvian airplanes in the Alex Crawford MMP books on the Hawker Hart and Fury series, as well as the Bulldog and Gloster Gauntlet. ( Editors Note - you can by emal them at leonidas-1@rambler.ru or sniff23@inbox.lv - the price was an estimate).

My thanks to Croco for the opportunity to review the decals