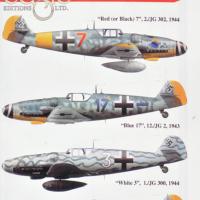 The second new release from Eagle Editions in their EagleCal line of decals is aimed at the Bf-109G-6. With the release of the Tamiya kit and the previously released Eduard and Zvezda kits there is no shortage of plastic to put these on. While I’m only reviewing the 1/48th scale decals, they are also available in 1/72nd and 1/32nd scales.

The Bf-109G-6 is a favorite amongst modelers and model manufacturers so the big thing is which markings to add to yours. EagleCals has you covered with this release.

Packaged in a ziplock baggie, you get 11x17 instruction sheet printed in full color. The profiles are on the cover but inside of the cover are larger versions. The artwork is done by James Bentley. The artwork is superb and the drawings are quite nice and reproduced well. Inside you can find the written interpretation of the camouflage and aircraft. The other page has the stencil placement instructions. The back cover has the plan view of the upper wings and a section of the lower wing .

All the aircraft have black center fuselage crosses. Most of the aircraft come from Jerry’s extensive collection so hopefully he is putting a special book together for us to enjoy as well.

The decals themselves are flawless and printed by Cartograf. That means they are the best in the world and will respond well with setting solutions. There are enough stencils for one aircraft. The swastika is broken down into two pieces. There are four colorful aircraft.

“Red (or Black) 7” from 2./JG 302 is the first aircraft and it is quite colorful. It is my personal favorite of the sheet. It features yellow rudder, fuselage RVD band, wing tips and lower cowling. The black and white spiral spinner along with the unit emblem on the engine cowlings and red numbers sets this aircraft apart from the rest.

“Blue 17” of 12./ JG 2 is next. This aircraft stands out for its underwing WGr.21cm rocket tubes. It also has a black wing root area which is common for JG 2 machines of the time. A splash of color is the yellow rudder and lower cowling.

Squiggles abound on the third aircraft from 1./JG 300. “White 3” is unique in that it has a white ring around the spinner but that is easy enough to overlook as the entire upper surface of the airplane has RLM 75 squiggles over it, including the spinner. The bottom of the aircraft is black. Just black. It is a unique looking aircraft.

“White 11” from 7./ JG 54 is the final aircraft on the sheet. It features its medium blue RVD band, which isn’t straight as usual. It has a slight angle on the front of the band. The Grun Herz emblem is below the cockpit and the 7 Gruppe badge is on the forward cowlings. This aircraft has the 20mm gondolas below the wings.

Colorful and unique markings that is what sets this decal sheet apart from many others. The expert research and the world class decal printers are a match made in model heaven. There is nothing that I can fault this sheet with. Another great release from EagleCals. I can only hope we can see these aircraft in print form someday.

Thanks to Eagle Editions and IPMS/USA for the review copy. You can obtain yours by contacting Eagle Editions directly at https://www.eagle-editions.com/ or 1-800-255-1830. Let them know you heard about it here.

Schemes for 109s
Previous Next