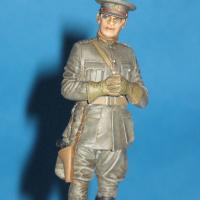 Shamrock Miniatures out of Ireland is led by Daniel Batta and offers excellent figures in lines ranging from historical to fantasy. The subject of this review is Michael Collins -"The Big Fellow".

Michael Collins was an Irish revolutionary leader, Minister for Finance, Director of Information, and (TD) for Cork South in the First Dáil of 1919, Adjutant General, Director of Intelligence, and Director of Organization and Arms Procurement for the IRA, President of the Irish Republican Brotherhood from November 1920 until his death, and member of the Irish delegation during the Anglo-Irish Treaty negotiations. He was nick named "The Big Fellow". The most authoritative record of the name comes from his family, stating that he was so called by them while still a child. It had been a term of endearment for their youngest brother, who was always keen to take on tasks beyond his years. It was certainly already established by his teens, long before he emerged as a political or military leader.

The kit is beautifully cast with the six parts- the main body/legs, the head, right and left arms, the hands and the pistol. A few small seams were quickly cleaned and I added the arms and hands. A small amount of putty smoothed with lacquer thinner and he was ready for paint.

I used the Scale 75 flesh set for the first time with the face. Still need some work on it but it looks good from distance. The clothes were painted to represent the colors on the box which has an excellent reference shot of the built and painted figure. Khaki drab successively lightened was the main clothes color with black boots and strapping picked out in Reaper Miniatures oiled leather and brown. Several light washes were applied. The buttons were painted silver and various other highlights picked out.

A final flat coat and we're done. This is a well sculpted and cast figure of an important historical figure and highly recommended. My thanks to Shamrock Miniatures for the chance to review this kit.

Another view
Previous Next