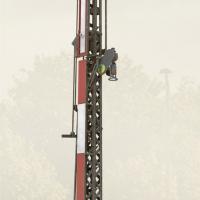 MiniArt’s Railway Semaphore is a nicely detailed kit with great fit of the parts, and will be a great addition to railroad dioramas. This kit is a model of a railway semaphore of the type used by Germany in WWII, and is part of MiniArt’s Building and Accessories Series.

The German Imperial Railway, (Deutsche Reichsbahn), used a signaling system, the H/V system semaphores, which signaled trains whether to proceed or not. The semaphores arms were painted white and red with a circle on their track side. One arm projected horizontally meant stop, and projected upwards at 45 degrees meant proceed. The semaphore in this kit is a two-aspect type with two moveable signal arms. The lights were gas operated.

Included in the review slideshow is a photo of an abandoned semaphore signal on the former Franzburger Suedbahn close to Velgast railway station (Meckl-West. Pommerania, Germany). Photo from Wikipedia by Global Fish.

MiniArt’s Semaphore model is 243.6mm or 9 1/2” tall. The Kit comes in a 5” x 15” x 2” end opening box. The model contains 102 parts on five gray plastic sprues, one small decal sheet, and one bag with clear parts, colored parts, and string. Assembly instructions are on the back of the box in 12 steps with small but highly detailed diagrams. I needed a magnifier to study the assembly details. Detail painting is shown in the assembly diagrams, and colors are called out in Vallejo, Testors, Tamiya, Humbrol, Revell, and Mr. Color paint colors.

Plastic parts are typical of MinArt’s nicely cast, highly detailed parts. Some of the parts are very small, which will create difficulty for some modelers. Some of the parts are thin rod-shaped pieces that are finely molded, but have multiple sprue connections and will be challenging just to get them off the sprue without breaking. Flash is apparent on some of the parts and one of the large truss members was slightly warped, but easily fixed during gluing

MiniArt calls out black paint for the tower, although I used German grey. The tower sections could be painted before assembly, requiring the seams to be scraped free of paint, or they can be painted after assembly. I painted the tower later in assembly but was still able to get good paint coverage on the inside of the tower sections.

Steps three through six assemble and install the signal lanterns and top pulley wheel. The locating pins and holes for the equipment are incredibly small, even microscopic. Best to hold the part in place then apply liquid cement, otherwise the cement will disintegrate the locating pins before they can be placed.

Step seven installs the control box at the base of the tower plus some of the vertical control rods. Only challenge here is getting the long thin control rods off the sprue and cleaned-up without breaking.

Step eight and nine install the movable signal arms and control mechanisms. There are some very small delicate parts to the control mechanisms. While the parts are small, the detail is very good and the fit of the parts is excellent. MiniArt indicates installing most of the parts with glue so they aren’t moveable. I imagine that a patient, imaginative modeler might be able to modify and install the signal mechanism so that it actually operates. In step eight the instructions show installing part Cb13 to the wrong lever. It should be installed to part Cb3 as shown correctly installed in step nine. Part Dc12 is also mislabeled in step eight, it should be Cd12.

The semaphore assembly is completed in steps 11 and 12 with the installation of the cable and reels at the bottom of the tower.

One small decal is shown added to the bottom of the stationary panel, part Cb1. The name of the signal gives information about its position and direction of the route. There are many options for this label on the decal sheet so research will need to be done to determine the correct label based on the location of the semaphore.

Assembly and finishing of the kit took approximately 16 hours.

What appears to be a simple structure is actually quite complicated and involves assembling many small intricate parts. The part fit, however, is excellent and will result in a nicely detailed railway structure. As usual, MiniArt does a wonderful job molding the small parts thin enough to be close to scale. The semaphore will be a great railroad diorama accessory.

Thanks to MiniArt for producing these great accessories and for supplying the kit to IPMS for review.

Base of Completed model