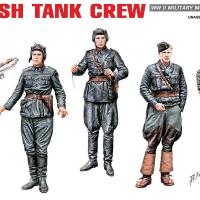 Over the relatively short time that MiniArt has existed, I have been consistently impressed by the imagination and daring of their figure releases. They have released wonderful civilians, troops and tank crews, often filling gaps no other manufacturer has been able to do. I’ve had wonderful results from their French and Italian tankers, and look forward to getting their Hungarian tank crew soon.

MiniArt has done it again with this current release, filling a void that has been in the armor field for quite awhile. On examining the contents of the box, you get five full figures, two of whom are in relatively typical light grey overalls, two in what can only be described as “pseudo-Russian” uniforms, and a single figure who really seems to exemplify the Finnish, with a mix of a Russian-style black leather jacket, Finnish riding pants and very local-looking boots.

The sprues seem to be very flashy, which is typical of MiniArt figures in general, yet most of pieces assemble relatively easily. That being said, I find myself more than a bit disappointed with the set overall. First off, the figures are tiny, even for MiniArt figures, which tend to be the smallest on the market in this scale (included is a photo with one of the set compared to comparable figures from other manufacturers). Second, all of the faces seem to be identical, with a sort of pinched look to them that isn’t up to MiniArt’s typical standards. In fact, the figures with the Russian tanker caps have had their faces squeezed even further to accommodate the headgear, which doesn’t help.

Under most circumstances, it would be the work of a moment to simply replace these less than satisfactory heads with Hornet items or similar. However, the figures are so undersized that typical replacement heads look distinctly large on the torsos. Consequently, I’m not at all sure of exactly what to suggest to make them look better.

I know that MiniArt can do better than this, and sincerely wish the figures within the box came up to the standards of the beautiful artwork on the exterior. Still, if you’re looking for Finnish tankers for your builds, this is all that is currently available on today’s market. I regret my caution regarding this set of figures, as they DO fill a huge gap in the armor model field.

My thanks to MiniArt for supplying the review sample and to IPMS/USA for a chance to look them over.

Finnish figure with tank
Previous Next