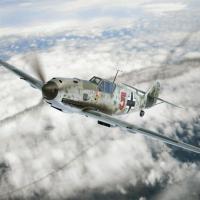 Messerschmitt developed the Bf-109T, based on the Bf-109E series, for operations from the aircraft carrier Graf Zeppelin”, when it was being developed and built in the late thirties. Although the ship was launched in 1938, the carrier, which was to have had a capacity of 40 aircraft, was never completed. A second carrier, the Peter Strasser, was started but never launched. It was scrapped in 1940. The Graf Zeppelin was retained, and work resumed briefly in 1942, but eventually, it was stopped in 1943. Specialized folding wing JU-87B’s and Bf-109T’s were developed for these ships.

The Bf-109T-0 prototype was followed by ten pre-production Bf-109T-1’s, converted from E-3’s. These had extended, manually folding wings and carrier tailhooks, catapult spools, and tailwheel locking devices. A unit, JG 186, was formed for their evaluation, but the project was shelved. Sixty Bf-109T-1’s had been ordered from Fieseler, and after on-again-off-again development, Fieseler was eventually instructed to complete all of the T-1’s as land-based aircraft without the carrier equipment, under the designation Bf-109T-2.

By this time, later models of the Bf-109 had entered service, and the Bf-109T-2’s were obsolete as standard fighters. They did, however, have very good short takeoff and landing characteristics, and they were used successfully in Norway until 1942 when they were replaced by FW-190’s. Later, some were sent to Jagdstaffel Helgoland, where their short field performance was found to be useful. In 1944, all of the Bf-109T-2’s were returned to the mainland, and in 1945, at the end of the war, only one was found intact by Allied Forces, at Augsburg, where it was probably scrapped.

According to the box art, the aircraft was operated by Jagdgruppe Dronthein, JG-77, and JG-11 in Norway, and NJG 101, at Manching, Germany. My references had few photos of the type in service, and there is no reference to the aircraft’s history in the literature supplied with the kit.

There is a tremendous amount of information available on the Messerschmitt Bf-109 series online and in print. One of the more useful I have found is Thomas Hitchcock’s Messerschmitt “O-Nine” Gallery, which, although published in 1973, still has good information and drawings. It has several pages devoted to the “T” models. The Squadron “In-Action” series does not mention this sub-type, so you are pretty much stuck with the Hitchcock book for information, or you can go online.

The kit provides a small sheet of drawings, which include a sprue diagram, including marked off parts that are not to be used, and 10 exploded assembly drawings. Unfortunately, there are some parts listed on the sprue diagram that are not mentioned in the assembly drawings. I still have no idea what parts #15 and #53 are. Otherwise, the drawings are useful. There is no text explaining the drawings, however. Since the kit obviously will be revised to produce a different model, it is logical that short wings for the “E” series are included on the sprues.

The box art provides a nice view of a Bf-109T-2 climbing past a low overcast, and four sets of four-view drawings showing each of the aircraft provided for on the decal sheet. These drawings are small but adequate.

This is the third kit of the Bf-109T that I am aware of. Years back, in 1980, I converted a Matchbox Bf-109E into a Bf-109T-2. In 1999, I obtained an A-Model kit of the airplane, and built it as one of the tail-hooked prototypes. Hasegawa has also produced this type in 1.72 scale, dated 2003, and it is basically their Bf-109E kit with resin wingtips and a metal seat, which replaces a rather boxy looking seat cast in the original kit. I have the kit but haven’t built it. From the looks of it, it seems to be an excellent kit, and would build into a very nice model. The decals are for two aircraft. On to the Brengun kit.

The kit is molded in light grey styrene and comes on two main sprues with one clear sprue for the windows and gunsight. There are also two resin parts, which provide the carburetor air intake, machine guns, and wing radiators.

In general, molding is basically good, with a lot of recessed surface detail. The fuselage halves fit together aft of the wing, but after installing the cockpit floor, seat, and instrument panel, the forward fuselage section did not want to join properly, mainly because the cockpit parts were slightly too wide. This wasn’t obvious when I glued the assembly to the fuselage side, but I think that the culprit was the firewall assembly, which was probably slightly too wide. Anyway, I managed to get the parts to fit eventually, although it took a bit of filing to get the wings to fit later. I had to use superglue on the forward fuselage, and since the upper engine cover was now slightly too narrow, I used putty to correct the error. The wings consist of three parts and assure the right dihedral angle when assembled. One of the wingtips didn’t want to fit flush, and it took some trimming on the inside to get rid of a small plastic protrusion. Flaps are provided, and they are most easily placed in the down position, and that is where I placed them. They are simple enough, with no interior detail to paint. However, like most airplanes, these were probably parked most of the time with the flaps in the “up” position, as this is most common. Next time you’re at the airport, look around and see how many airplanes you see parked on the flight line or in tie-downs with the flaps down. It is a common item on a checklist—“Off Runway. Flaps Up.”

With the slightly wider forward fuselage, it took a bit of trimming to get the wing in the proper position with the correct dihedral, but I eventually got it right. Once on, I didn’t need much putty, as the fit was right on. The tail unit attached easily, although you have to wait until after painting to install the struts. The resin radiator units are detailed, but they are difficult to see through the very narrow intakes on the radiator housings.

The canopies sections are finely detailed and fit easily into place. Nearly all of the windows are nearly square, so cutting and mounting the masking tape before painting are easy.

I chose to do the Bf-109T-2 attached to NJG-101, which called for a standard 74-75-76 paint scheme. The box art gives the suggested pattern, and after the two greys and masking, I applied the 76 underside hellblau to the rest of the model. I painted the landing gear covers and several of the small parts separately.

Decals went on easily, and after a coat of Dullcote, the effect is pretty good. I did very little weathering, as these airplanes probably didn’t last long in service.

This kit makes up into a fairly unusual version of the Bf-109, and as such, should be included in any collection of 1/72 scale WWII Messerschmitts. I would put the kit on a par with the A-Model kit, which I recall having no basic problems with. If you can find a Hasegawa kit, check it out, as it appears to be a better kit. I bought mine at a swap meet for $7.00, but this was a long time ago, and the price has probably gone up since then.

The Brengun is not the easiest kit to build, and I wouldn’t suggest it for inexperienced modelers, but it is definitely buildable, and worth getting if you need a model of the subtype., and can’t find another issue.

Thanks to Brengun and Phil Peterson for the review sample.