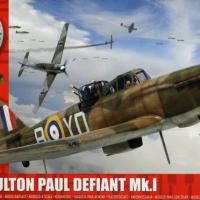 The Boulton Paul Defiant Mk I, among RAF pilots it had the nickname "Daffy". It was a British interceptor aircraft that served with the Royal Air Force during the Second World War. They were designed and built by Boulton Paul Aircraft without any forward-firing guns, as a two-seat turret fighter, powered by a 1,030 hp (768 kW) Rolls-Royce Merlin III piston engine and 723 built. It was a contemporary of the Royal Navy's Blackburn Roc and the concept of a turret fighter, as it was developed in both aircraft, related directly to the successful First World War-era Bristol F.2 Fighter.

In service, the Defiant was reasonably effective as a bomber–destroyer but proved vulnerable to the Luftwaffe's Messerschmitt Bf 109 fighters. Its lack of forward firepower was its major weakness in daytime combat and its true potential was found when it switched to nighttime operations. In the end, the Defiant found use in gunnery training, target towing, electronic countermeasures and air-sea rescue. The sole remaining Defiant is kept at the Hendon museum.

My sample arrived in a small box with an additional starter set blister pack attached. Inside the blister pack are 6 small acrylic paints tubs, 2 paint brushes and a small tube of poly cement. Inside the box I found one very nice and highly detail plastic model kit ready to be assembled, the easy to follow instructions and a small Cartograf decal sheet with one option.

The kit is simple and straight forward. Highlighting the key aspects, I began with interior and cockpit assemblies. It was here that I first used the kit supplied paint and I was surprisingly pleased with the results. Just like painting by numbers the small tubs of paint are numerically identified. The paint brushes are pretty decent too. I closed up the fuselage and moved right through the next several steps without any problems or issues. In just a few enjoyable evenings, I had it completed, masked and ready to paint. However, I must confess that it did require a small amount of filler on the fuselage seams. I shot the supplied paint thru my airbrush using Testors acrylic thinner with great success. I then sprayed a gloss coat of lacquer to seal it and applied the decals followed up with a final application of Testors dull-coat. I built and finished the kit using only what was supplied except for a little filler, lacquer sealers and Alclad paint for the exhaust stubs.

All together for what you get is without a doubt a excellent bargain. Airfix is to be commended for releasing a premier kit as a starter set. I give the kit a 9 out of 10 on the Greg-O-Meter and 10 out of 10 for being a starter set. I highly recommend this kit to anyone, period. I would like to thank IPMS, Airfix and Hornby for allowing me the opportunity to present such a fine kit.