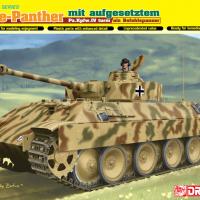 The German Panther is one of the most important and recognizable tanks of WWII. There were many variations and Dragon’s boxing here is a special conversion by heavy tank destroyer battalion s.Pz.Abt.653. I believe this was a one-off conversion in the field. Basically a Panther D hull with a Panzer IV Ausf. H turret added to the top. There is no history of the vehicle on the directions or box top, but there is a little to be found online. I’ve read conflicting things online stating that the gun was operational, or if it was non-functioning. The sources I’ve found did all agree with one thing – the turret was fixed forward. This vehicle saw service in Russia 1944 with s.Pz.Abt.653 – which is the kit’s sole marking option.

This Dragon release is in a nice sturdy box literally packed with kit parts. My thoughts when opening the package were literally “what did I get myself into?” There are over 20 sprues of parts included. One quickly sees that there are sprues for Dragon’s existing Panther kits and Panzer IV kits compiled into a boxing for this specific vehicle. The builder will end up with a mountain of “extras” for their spare parts box after the kit is finished.

All parts are molded in the typical grey, with a small PE set, one piece DS Tracks, and two almost vacuform like sets of side skirt panels.

The directions for this kit are also compiled from existing kits, which results in a mish-mash of photos with parts callouts and newer line drawings with parts callouts. All of the “Panther” assembly steps are done in photograph format; while the Panzer IV H turret assembly steps are line drawings. The assembly instructions wrap up with photo illustrations bringing everything together.

Some caution must be taken when referring to the directions and corresponding sprues letters/numbers. A builder with some previous armor experience will easily see that some parts are for the Panther and others are for the Panzer IV – however there are multiple (different) A, B, and E sprues. A tip of the hat to Dragon for consistently labeling the matching letters in either blue or black on the parts diagram, and on the assembly steps. Careful study of the directions will show both a blue E and a black E used during the assembly steps – and the same for all sprues with multiple matching letters.

Assembly starts with the Panther hull & drive gear. The only issue I noticed in the early steps was that kit part E9 doesn’t appear on the directions. E9 should be matched up with E11 to form the inner road wheels. The callouts mention E11 but not E9 – although both parts are shown in the photos for step #3. Both the Panther hull and Panzer IV H turret assemblies were straightforward and I didn’t experience any problems. Everything fit together well, and I didn’t use any filler/putty on this build. I chose to close all hatches and ports, but options (and parts) for them open are included. Also included as an option are smoke discharger canisters on the turret. I chose not to use them on this build. Photoetched parts for the engine deck grills fit well and were easily applied. The side skirt’s sprues (PS) are done in a thin white plastic. These are a nice touch as they are thin and more ‘true to scale’ than a normal plastic part.

The kit was painted with Tamiya paints. A base of XF-60 Dark Yellow was over-sprayed with both XF-58 Olive Green and XF-64 Red Brown. As I mentioned, a single vehicle was built and the decal options are for that single kit. Decals include three crosses and two unit emblems (although only one is used.) Decals went on well and settled down with a bit of Solvaset. A quick wash, and some dry-brushing finished the kit.

This was a fun and enjoyable build. Due to the volume of parts, & sometimes potentially confusing directions - I would recommend this kit to anyone with a few armor kits under their belt. It will take some time to get through due to the sheer number of parts.

This is a great kit if you’re interested in Panthers, Panzer IV’s, odd-ball German armor, or if you just want to see the judges stammer at an awards ceremony trying to get the name out. I think it is a nice kit and adds a unique look to an otherwise uniform display case.

Thank you to Dragon USA for continuing to add to their WWII Armor line and for this review sample.