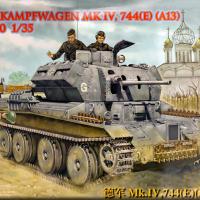 This kit represents a Cruiser Mk IV A13 captured from the British Army during the Battle for France in 1940. The Germans used the vehicles as gun tanks to support their flame tanks for the invasion of the Soviet Union. The box contains the following parts.

This kit is over-engineered and very 'fiddly", but the detail is outstanding and with patience will build into a nice little replica of the real thing!

The kit contains the sprues from the original Cruiser A13 Mk III kit with additional parts for the German captured MK IV. I had 85 injected parts and nine PE parts left over.

The detail of the parts is exceptional with no flash, and no exposed ejection marks. The kit has most of the parts needed to build the British Cruiser MK III/IV A13, except for the decals and the original track. Clear lenses are available for all of the headlights and for the gunner’s sight.

The instructions come in a booklet of what appears to be A5 paper. Included are a parts map, a paint color recommendation chart, and a full color four-view drawing on the back cover. Locations for many parts are vague so I used the painting guide and the box cover to determine proper locations.

I painted the tank panzer grey as I built. I painted the wooden beam in a tan color and when dry I dry-brushed on a dark brown to give the beam a weathered wood look. At this time I have only weathered the track and the exhaust systems.

The decals are very opaque, which is a good thing, as they are either white or yellow. They have no clear edge and did not silver even over the flat paint. You have markings for just one unit, the 100th Flammpanzer Battalion in the 18th Panzer Division. Enough numbers are provided to mark any vehicle in the battalion if you can find any references. I selected the numbers shown on the box lid.

The detail on the parts of this kit is outstanding. There were a number of PE parts used to detail plastic that would have been easier for the modeler if the details were in plastic. There was no duplication of plastic and PE parts. The brass used for the PE is very thin which was helpful where folding was required. The thin metal was detrimental for the many long parts as just handling the parts caused them to bend. To achieve this detail required more parts and more complicated engineering. Bronco Models covered both sides of the PE sheets with plastic sheet. I removed the sheet from one side and left the other side to hold the parts as I cut. It greatly reduced small parts from flying around the room. Overall, although frustrating at times, I like the results.

I would like to thank Mike Bass, Laura Carney and all the fine folks at Stevens Internaional for this review kit.