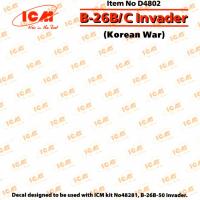 Each of the four options are intended for black-painted aircraft. A double-sided, full-color instruction guide is provided. Only side views of the aircraft are given. Placement markings are fairly understandable; however, cross-referencing is recommended.

The diagram for “The 7th Chadwick” could be improved. This aircraft has a bright red nose which covers the front landing gear door and part of the bombay doors. The given diagram is insufficient and does a poor job of showing the slope angle of the red color as it passes under the wing and does not show how much of the bombay doors are painted red. You will need to consult outside resources to obtain accuracy.

The fourth aircraft depicted is a clear-nosed aircraft. Although the decal set states that it is designed to be used with ICM kit NO48281, this kit does not have a clear-nose option available.

The decals are thin and need to be treated with care. Working them too much or allowing too much “wet time” will give you poor results. The sample only required a water soak of about 10 seconds and then resting on a paper towel for about fives seconds.

When transferring them to your model, be sure that you are very close to your target area. Due to the thinness of the decals, if you attempt to slide, shove or move them too much they will tear. If your surface is prepared properly (clear coated), these decals virtually disappear once applied and look amazing after they have dried.

Overall, this is a very nice decal set and is a nice addition to the ICM B-26 Invader line.

Thank you to ICM for the honor of using this decal set in conjunction with the build of kit no. 48281 (see review), and thank you very much to IPMS for the opportunity.