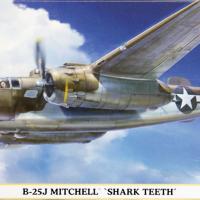 The short version -- I liked the kit. Hasegawa has engineered this kit well.

The final and most built series of the Mitchell, the B-25J looked less like earlier series, apart from the well-glazed bombardier's nose of nearly-identical appearance to the earliest B-25 subtypes. It had the forward dorsal turret and other armament and airframe advancements. Also produced was a strafer nose first shipped to air depots as kits, then introduced on the production line in alternating blocks with the bombardier nose. The solid-metal "strafer" nose housed eight centerline Browning M2 .50 caliber machine guns. All J models included four .50 in (12.7 mm) light-barrel Browning AN/M2 guns in a pair of "fuselage packages"; conformal gun pods each flanking the lower cockpit, each pod containing two Browning M2s. Total J series production was 4,318.

The box says that this kit is Skill level 3, and I believe it. When you open the box, there are over 130 parts on multiple sprues, a poly bag with the grey plastic, one bag with the clear parts and a decal sheet. Some parts are optional, such as a different nose for the bombing configuration, and some not used in this kit. Parts sprues designated D, J and M are co-joined, but clearly marked. There are two sprues of E parts.

The instruction sheet is one long, folded piece of paper that creates 8 pages of drawings in black and white. Actually, gray tones and white for the illustrations. There are no color illustrations to give you any painting hints. The exploded drawings are clear and I had no trouble figuring out where pieces went. However, as in steps 10 and 11, the alternatives of (1) solid nose variant and (2) glazed nose, the instructions could have included tips to save you effort in early assemblies that will not show with the solid nose. Like many modelers, these details may not be seen, but I know they are in there somewhere. The color call-outs use codes for GSI Creos Aqueous or Mr. Color. Using a conversion chart for the Internet, I used Model Master and Humbrol enamels.

This limited edition kit features two sets of decals for USAAF aircraft from 1944, each includes shark’s teeth as part of the nose art. The decal options are USAAF 486th BS/340th BG Code: 6E: 328090 Italy May 1944 and USAAF 499th BS/345th BG Code: 147: My Duchess Philippine May 1944. I chose the Pacific Theater bird as I had always wanted to build one of those really fearsome gunships that could eat up an airfield or a ship with equal ease. When I got to applying the decals, I realized that the wonderfully complex nose art would be a challenge to get on straight over the .50 cal machine guns protruding from the nose. If I had thought ahead far enough, I would have left the machine gun placement until after the nose art was put on. After all, with the solid nose, only the barrels would show and could be put in place from the outside.

In keeping with the skill level, there are many “fiddly bits,” cast nicely in the good quality styrene, but small nonetheless. Examples include: a bombardier’s seat in the bomb bay area of the plane’s interior as well as one in the nose, all but unseen when the fuselage halves are together or the solid nose variant is made. Detailed bomb racks are parts to be glued to the inside of the ship, but are obscured by the bombs hanging on them, and oxygen bottles and other gear that disappear when the plane is assembled. The nose gear must be attached to the cockpit tub before that is clasped by the fuselage and is at risk of being snapped off during the rest of the construction process. The same is true of the two tail mounted machine guns. The machine guns for the nose of the gunship variant each come with ammo trays that are concealed by the solid nose.

That having been said, the fit of the fuselage halves to each other is firm. The wing halves go together well. The engine nacelles are almost fool proof in assembly and are solid. The wings are easily positioned and made sturdy by spars that extend from a solidly-made assembly aft of the cockpit.

Panels are well engraved and show up well with pre-shading, as I did, or weathering. The kit includes the crew access ladder that drops down from the fuselage. Also provided is a step-stool to place under the aft crew ladder and keep the completed model from tail-sitting. At first, I thought “I won’t need that rig; I will put sufficient weight in the solid nose that it will sit right.” Well, no. This big, hefty model needs that ladder/stool combination to keep it upright, in spit of lots of lead shot super-glued in the nose. Just sayin’…

The decals slid off their paper backing smoothly and set nicely with the usual solutions. The yellow propeller tips are provided as decals, but I painted mine. The port fuselage national marking is positioned right over some molded on protuberances. A few cuts with a number 11 blade and liberal applications of solvent seems to be a sufficient cure for that.

This is a nicely manufactured B-25J kit. My thanks to Hasegawa for providing the kit and to IPMS for the opportunity to review it.