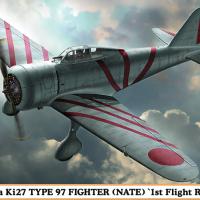 During the early summer of 1935 the Imperial Japanese Army issued requests to Mitsubishi, Kawasaki and Nakajima to competitively build advanced fighter aircraft prototypes to replace the Kawasaki Ki-10 fighter biplane. Before the end of 1935 Nakajima responded with the Ki-27, a single-seat monoplane fighter derived from the company's ‘Type P.E.’ aircraft.

Of the three contenders Nakajima’s nimble Ki-27 was by far more maneuverable than the other two but was not as fast and had a slower climb rate than the Kawasaki. Finally, after further testing in late 1937 the Nakajima was ordered into production as the Army’s Type 97 Fighter Model A or Ki-27A. Later production aircraft introduced further refinements, including an improved cockpit canopy, these carried the designation Ki-27B.

Upon it’s entry into service over northern China in March 1938 the Ki-27 gave an immediate appreciation of its capability. Apparently what the Ki-27 lacked in speed and climbing ability, it made up in maneuverability. The Ki-27s became masters of the airspace until confronted later by the superior Soviet Polikarpov I-16 fighters. In 1939 during the Battle of Khalkhin Gol, Ki-27s saw aerial combat against Soviet I-15 biplanes and I-16 monoplanes. When the faster I-16s appeared, it seemed the Ki-27s had meet their match and could no longer cut it.

At the beginning of the Pacific war the Ki-27s, allied codename 'Nate'. A.K.A. 'Abdul' in the China- Burma-India theater, took part in the invasion of Burma, Malaya, the Netherlands East Indies and the Philippines. The Ki-27 had considerable success against the Allies in the initial stages. Then as more modern fighters became available they were quickly relegated to bomber escorts and secondary roles, remaining deployed in this capacity until 1943. After that they were transferred for air defense of the home islands where they were used as advanced trainers until their final role as kamikazes. 3,399 aircraft would be built by Nakajima (2,020) and Mansyu (1,379) before production came to its end in 1942.

My sample arrived in the standard sized box for smaller 1/48 scale Hasegawa offerings. The box top sports an inspiring painting of the Ki-27 caught in a glimpse of sunlight while flying through dark clouds. I found the contents well protected in the typical poly bags. The parts themselves are still decent considering the molds have been around for quite some time. The exterior detail is excellent with crisp panel lines and very fine riveting. The engine also exhibits quality detailing, however the cockpit is rather sparse. In addition, the canopy comes in two alternate versions and both are very nice but sadly they are each molded in a one piece closed position. All together there is; 46 pieces of plastic, a plain black and white instruction sheet with blue highlights, a similar printed decal option amendment sheet and lastly the beautiful decal sheet printed by Hasegawa. Hasegawa decals have really come along since I first built this offering several years ago.

The cockpit is pretty basic in construction and detail but has potential if someone wanted to trick it out it wouldn’t be hard to do. The engine has a weird oil cooler that mounts over the crankcase. The instructions are a little vague on the orientation of this device and it has no discernable mounting points but a few online photos cleared up my guess work and I soon had it completed. Next I closed up the fuselage halves with the engine and cockpit sub components installed. Following the instruction build steps I added the wings and horizontal tail. I then finished up the construction by adding the main landing gear before going out to the paint shop.

This kit is just a joy to build and everything just falls together. I encountered no problems in fit or kit design. Hasegawa lists this one at a skill level 3 but I highly recommend it to anyone.

Thanks to Hasegawa, Hasegawa USA, Hobbico, and IPMS for the opportunity to present such a fine model kit.