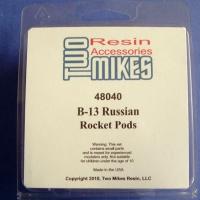 Two Mikes has built a business by offering details for jet aircraft that few if any companies offer. As I undertook a build review of the 1/48 Eduard Su-25 kit (ex-OEZ, now KOPRO plastic), owner Mike Reeves generously provided two of his details sets toward the effort

Given the variety of weapons carried by Soviet/Russian aircraft, it is surprising that there is not a greater selection for the modeler in 1/48. Two Mikes has stepped in a started variety to the ordnance available, in this case the B-13 rocket launcher. The B-13 was first fielded in the late 1980s and came about out of military necessity when the Soviet Air Force found that their inventory of air to ground rockets lacked the punch to penetrate the caves and stone dwellings of Afghanistan. A decision was made to develop a means to air launch the 122mm Katushya rocket which had proved effective with ground forces. The result was the B-13 launcher which carried five 122mm rockets and reached operational status in 1988, the last year of the Soviet involvement. The natural platform was the Su-25, with its slower speed and ability to loiter on station, although other aircraft can carry it. As it turned out, this review was pure serendipity since I had decided to use the kit markings for a Soviet Frogfoot stationed at Bagram airbase in 1988; the match was perfect.

Mike Reeves donated two sets (4 launchers) for review. These launchers come in three parts, cleanly cast in durable, crème colored resin. There were a few very tiny pinholes that I filled with CA. It is evident that the master is finely machined as the detail and symmetries of the front and rear assemblies are perfect. I separated the three sections from pour stubs and cleaned them up. Here is where I ran into some minor issues. The trick with the three sections is to align the front missile openings with the rear. I could not find any clear marks to aid the alignment, so I made my own. I also found that the sidewall of rear section of the launcher was not concentric, so using a model knife I scraped the opening to straighten the fit. Other than that, the launcher assembled without further issue.

Once assembled the launcher closely matches the prototype. The only thing missing are small pads on the top of the launcher which I believe ride under pylon sway braces so that the jack screws do not dig into the thin casing. I gave the launcher an aluminum finish with Model Master buffable Aluminum which it took easily given the smoothness of the resin. I drilled some holes and inserted .016 brass wires to attach it to the wing pylon and to replicate the mounting points. The result – a Frogfoot with a mean look. The Two Mikes B-13 is a great ordnance addition for Soviet/Russian aircraft modelers – worth buying!

Thank-you to Two Mikes Model Accessorries and IPMS/USA for this review sample.