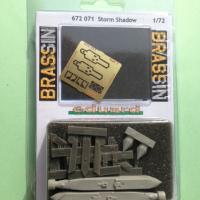 The Storm Shadow/SCALP EG is an air-launched cruise missile developed for England, France and Italy. The missile is a follow-on development of the earlier Apache anti-runway missile, carrying a warhead instead of multiple sub-munitions.

The set consists of two resin missile bodies, two resin intake spikes, resin wings and fins (both retracted and extended versions), resin mounting brackets for the Tornado and a brass fret with two circular exhaust rings, two brass mounting brackets applicable to the Eurofighter, the Mirage 2000 and the Rafale and brass cover plates for the wing swivels. The set also includes miniature mounting lugs to attaching the missiles to the pylons. This is topped off by an excellent decal sheet. As the set includes the lower fins in both the retracted and the extended positions, and the wings are separate pieces, you have the option of building the missile with the fins retracted and the wings folded back as it would appear when mounted on an aircraft, or with the wings and lower fins extended as they would be in flight. As I plan on mounting mine either on a Eurofighter or a Rafale, I built both in retracted position.

After cleaning the resin parts to remove any molding residue, the first step is to separate the intake spike for its pour plug and installing it. Eduard’s directions have you remove most of the resin behind the spike before attaching it, however, I test fit the spike after removing just the pour stub and found that the extra resin cleanly slides into the opening in the missile undersides and actually provides a very good surface for supergluing the intakes to the missiles, and I ended up with a very neat join with no problems and no filling or sanding needed. Next I installed the wings in the stowed position followed by the etched brass cover plates that seal the opening in front of the wing pivots. The rear fins were next, and I would recommend drilling the mounting holes for the horizontal fins and the top fins, as the fit is very tight.

Painting the missiles is simple as they are overall grey. If you are building missiles for installation on a Tornado, the recommended color is FS 36320 and if you are building them for installation on the Eurofighter, the Mirage 2000 or the Rafale, the recommended color is 36118. The only other color on the missile is the exhaust ring which is painted silver. I also painted the aft end of the missile flat black before I installed the exhaust ring to give some depth to the exhaust.

As with the other Eduard weapons sets, this set includes a very comprehensive decal sheet with about 20 decals for each missile. The decals are well printed and snuggled right down when applied with Micro Set and Micro Sol.

I really enjoyed putting these missiles together and decaling them, and I am very pleased with the results. Now I have to build an aircraft to hang them on!

Highly recommended. Thank you to Eduard and IPMS-USA for the review sample.

Top and bottom view
Previous Next