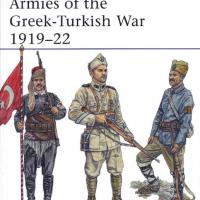 Osprey Publishing’s latest Men-at-Arms monograph focuses on the fighting men, weapons and equipment used during the war between the Greeks and Turks, in the aftermath of World War I. This from the website: "This is a comprehensive guide to the armies that fought a devastating and decisive conflict in the Eastern Mediterranean between the two World Wars of the 20th century. From the initial Greek invasion, designed to "liberate" the 100,000 ethnic Greeks that lived in Western Turkey and had done for centuries, to Mustafa Kemal Atatürk's incredibly efficient formation of a national government and a regular army, this was a war that shaped the geopolitical landscape of the Mediterranean to this day. It gave birth to the modern Turkish state, displacing millions and creating bitter memories of atrocities committed by both sides. Augmented with very rare photographs and beautiful illustrations, this ground-breaking title explores the history, organization, and appearance of the armies, both guerilla and conventional, that fought in this bloody war".

Admittedly, I had zero knowledge of this conflict, and found the 9 page introduction and chronology invaluable to get up to speed on the general facts of the Greek invasion of Anatolia (western Turkey) in 1919 as encouraged by the Allied governments, and the Turkish Army's victory in 1922 in several decisive battles after the Greeks had overextended their forces past the Milne Line.

The book is well organized. Following the chronology, the author provides descriptions of the Greek Army in Asia Minor, the Turkish Forces, Weapons, Uniforms, and Plate Commentaries. An index is also provided. Of notable interest is the Turkish irregular forces, known as the Kuva-Yi-Milliye, outfitted in various civilian and military uniform cast offs, with their layers of bandoliers wrapped around their midriff. These are highlighted in the plate illustrations by Stephen Walsh, who has provided 5 superb pages of Turkish soldiers, in widely diverse outfits. The author Philip Jowett who has written many of the Men-at-Arms monographs, keeps his prose clear and factual.

An enjoyable and educational read, highly recommended for history buffs and modelers. Thanks to Osprey Publishing for the review copy, and thanks to IPMS USA for the opportunity to read and review this book.