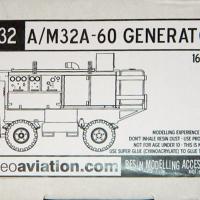 The “Dash 60”, as it is known, is a portable gas-turbine powered unit designed to provide high-pressure air to spin jet engines up to starting RPM, and at the same time provide 28-volt DC, 1500 amp, or 115/220-volt AC three-phase electrical power for aircraft systems. Once the engine starts and the aircraft is running on its own power, the cart is shut down and removed from the vicinity of the aircraft, allowing it to depart.

This kit comes with provision for three different decal marking options; one in standard 1960’s through 1980’s Yellow, one in the USAF 36079 overall dark green, and one gray Navy version. They have also been painted in Desert Tan, but this is not catered for in the kit.

Fun fact: Sometimes these turbines fail and come apart, spreading the blades in radial direction from the turbine disc….the operators of the unit are therefore not supposed to stand within or next to the red line areas for safety reasons. Hence the warning stripes.

Another fun fact: even with the automatic start feature, if these things have a “hot start” (not enough airflow to properly start the unit and sustain the engine running properly) a really large, orange and yelllow flame comes shooting out of the exhaust box at the top of the unit. VERY impressive on a dark night, and it gets the attention of EVERYONE in the vicinity. Personal experience here.

The shipping box for this kit is a standard plain cardboard item with a drawing of the power unit, containing 24 resin parts cast in pale tan with a slightly rough, (not glossy) satin finish. I mention this as it is a LOT easier to paint resin with a slightly rough surface, and it looks more realistic and not “toylike”. Included in the kit are such details as the lower forklift carry beams, which are permanently mounted laterally on the centerline of the unit between the axles, allowing the owning organization to move the cart onto airborne pallets for carrying on transport aircraft or vehicles to wherever they are needed. The exhaust box at the top of the unit has subtle grating inside, just like the real item. Impressive…

Assembly begins with carefully flat-sanding the mating surface between the upper main power unit body to the lower suspension system. I used my bench sander to remove about 1/64” of the material, then followed with a flat metal sanding “T” channel as there is very little to remove from the main body. The suspension required removal of more material, to the point the excess resin web between the end fuel tank mounting frame and the body became paper thin. Easy to remove, and check to make sure all mates well… When finished the modeler carefully uses superglue or epoxy to attach the parts to each other. I highly recommend taking your time and using a sharpie marker to provide alignment marks on the lower part of the body, because even a micro-millimeter off on alignment will be very noticeable.

Once this assembly has cured, I attached the axles, the tow tongue, and wheels to the suspension, making sure all were aligned and straight. Notice the instructions point out the difference in the powered wheels verses the unpowered wheels; this power unit, like its predecessor, the MD-3 power cart, has a gearbox and finger switch on the towbar, allowing one-person movement of the cart on the ramp… hence the transaxle on one of the cart axle beams.

The remainder of the assembly went fast; I primered the kit parts with automotive flat black primer, then used Testors 36079 dark green to finish. After painting I attached the towbar in the vertical position on the tow tongue, as it is a “Detected safety violation” to leave the tongue just laying out on the ground, ready to trip the busy line workers. (the only time you are supposed to leave it out is when you are attaching this thing to a tow vehicle’s pintle hook).

The interior of the power plug compartment and the control panel were white on all the -60’s I worked with, so that’s what I painted them. The instrument dials details were spot-painted black for the bezels, and the dials themselves came from the decal spares box, as there are no decals provided for them in the kit.

The power cord was cut in two pieces, and superglued to the plugs; one end has the proper details for the six pins used on most NATO power plugs, and this should be facing away from the cords. Used green masking tape to simulate the bands which keep the power cords together; put a strip on a cutting board, use a sharpie marker to color the green tape black, then cut strips so you can make wrap the bands around the wires. Space these about every two inches. (Why green “Frog” tape? The adhesive appears to be a bit more aggressive than the “gentle” masking tape, and I have found it works better than blue tape, doesn’t leave tape residue on freshly-painted surfaces, and provides a better paint seal… it’s also thicker than Tamiya tape, so I find it seems to make more scale appearing straps and harnesses than blue tape… ) and Tamiya tape is a heck of a lot more expensive.

The air cart tube is a very visible item, and the kit provides what appears to be plastic thread to wrap around the fabric canvas tube to simulate the external strengthener wire that runs the length of the real tube. As the air tube on the actual aircraft is rubberized fabric, it tends to flatten out when folded. I used a lot of time to make an effort to simulate the tube strengthener wiring, and ended up adding about four feet of coat threat, colored again with sharpie marker, to finish as the material provided was insufficient to encircle the entire tube. Superglue and accelerator is our friend, and once dried and wrapped, the tube ends and fittings were painted Tamiya natural metal and then superglued in place at the ends of the fabric hose.

The 90-degree air source tube was installed in the hole on top of the power unit, the hose folded and superglued down to the top, and the same was done with the electrical power cord. I cut off half of one of the plugs to represent the plug being inserted in the outlet. A bit of flat coat, some weathering, and the “sit back and admire your work” phase began.

A fantastic piece of equipment for a large-scale diorama. Details are there, and it is obvious the Videoaviation group have done their research.

I commend Videoaviation for producing these items; as a diorama accessory they cannot be beat, and this small company is addressing the requirement with excellent products… check out his website. Thanks very much to Videoaviation for providing IPMS USA these items for improving our models… and to IPMS reviewer corps leadership for sending it my way!

Generator with hose on top, and operator control panel (white) in foreground

View of opposite side of generator

Hose and exhaust detail for the A/M32A-60 generator

Bottom of model and another view of the infamous warnings

Side view of vehicle with its operator instrument panel
Previous Next