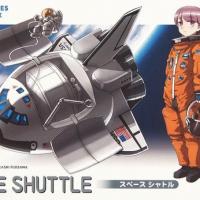 I was happy to see Hasegawa reissue these kits as I have several of the "Eggplanes" but not some of the re-releases. The kit comes in a sturdy top opening box - great for holding the parts as you work on the model. There are thirteen White, Eleven Black plastic parts and one crystal clear windshield and with a colorful decal sheet with the names of three different shuttles. The canopy is loose in the box allowing it to be scratched up a bit, but a little polishing and a dip in Future took care of that problem. Some of the parts were also scratched but nothing a little polishing and painting would take care of. One thing about these re-releases is that Hasegawa have eliminated the bases that were in the original issue. This kit no longer has the clear Blue half earth base and the wire to support the shuttle above it, see picture. Missing from the kit I received was the wire that goes from the shuttle bay load to the Astronaut that is shown in the instructions.

Now let's proceed with the build. As I had a plan for display that didn't include the landing gear I used pieces of sprue to fill in the locating holes for the landing gear in the lower wing part. Both the wing and fuselage parts fit very well with no filler required. When I put the equipment bay into the fuselage there was a small step near at the top so I covered it with a piece of .005 thick evergreen sheet to smooth it out. There were some shallow ejector pin marks on the inside of the shuttle doors that I filled with some Squadron putty and when dry sanded them flush. Later when I had painted the outside of the doors I covered the insides with some Bare Metal Foil. The Astronaut's breathing apparatus didn't fit all that well but a little sanding on a flat piece of sandpaper soon set that straight. On the equipment for the shuttle bay there was a rather deep seam that would have been very hard to fill so I ran a sheet of custom fitted Evergreen sheet around it to eliminate the filling chore.

I use the new Tamiya extra thin glue that causes the plastic to melt and will fill small seams/gaps in the plastic parts. I have also noticed it doesn't seem to damage well-cured Model Master paints if used sparingly. A little bit of sanding here and there and we're ready for the paint shop. I used the recommended colors call outs. The main colors are just White and Black with Neutral Gray leading edges and with a couple of coats of Future the shuttle was ready for the decals. As the windshield wasn't the best of fits I painted most of the black areas and only used part of the Black window decal to save a lot of masking. Next a little Flat Black for part C5 the engine nozzle holder and It just snapped into the recess at the rear of the shuttle and we're almost done. I shot the engine nozzles MM Jet Exhaust on the inside and MM Burnt Metal on the outside. When dry I glued then on with just a touch of Tamiya glue. I masked around the facemask on the Astronaut and applied Gold Rub 'n Buff to the face mask area and when dry I polished it up with a cotton tipped applicator. I also had painted the cockpit area Black, as there was nothing to see in there.

The decals went on with no trouble at all and when dry I cleaned off the decal residue with damp cotton tipped applicator and applied another coat of Future. Next I coiled the wire that I robbed from a shuttle kit I had bought at Anaheim and painted it White and then glued it to "Load" and stuck the Astronaut on the other end. I then installed it into the equipment bay.

As I had the earlier kit I had the little wire that was to be used to support the shuttle but I came up with a goofy idea. I drilled a hole the size of the wire and glued it into a world globe I had near the top and mounted the shuttle on it for display. Yes, I know that the shuttle normally orbits the earth with the equipment bay facing the earth but if I did it that way then all you could see would be the lower tiled area of the craft - artistic license, boys and girls.

All in all another fun build. Again I'm thinking about which one of my other "Eggplanes" do I want to build. Lets see F-86, SR-71, Fw-190 etc so many choices so little time.

My thanks to Dragon Models USA, purveyors of many a fine model kits and supplies to wet our appetites and keep us happy and Hasegawa Hobby Models and IPMS/USA for the kit, a great addition to my model shelf.