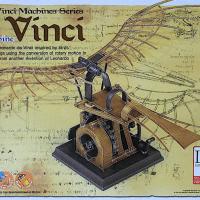 The mind of Leonardo DaVinci must have been an interesting place. There's an entire museum in Milan full of his art work, architectural and biological drawings, and working models made from his original plans for a wide variety of machines, and Academy has released a series of spring-driven working models based on these. The subject of this review, his Flying Machine, contains a series of gears that drive two bird-like wings up and down. Of course, it doesn't actually fly, but it was an attempt to understand how birds do.

The kit consists of two sprues of parts, one black and the other tan-textured to look like wood. The plastic is a little soft, but that is to facilitate the snap/friction assembly system. It kind of reminded me of the premiums you use to get in cereal boxes. Also included is a self-contained winding spring unit that is probably standard among all the kits in this series. The parts are nicely molded and everything fit well. I chose to do the kit as I would have as a young modeler, right out of the box with no paint. (Exception – the name plate. Couldn't resist.) No mold seam clean up, no ejection pin mark filling, just cut the parts off the sprue and put it together. The friction-fit system works well due to the nature of the plastic, and assembly proceeds easily. You need to follow the directions, however, as sometimes you have to do things in a particular order for it all to go together, or get things in the proper orientation so it all works. From the time I opened the box to the when I turned on the completed model and watched the wings go up and down, about 20 minutes elapsed. These would be great kits to use in Make and Takes as they go together quickly and are "action toys", or they could be used to teach basic science in a fun way. At $19, they're a little pricey for that, but they are certainly unique. If you wanted to, I suppose you could paint them up and make the wood look more real and the gears look more like metal. You could even add a "canvas" covering to the wings like the real model has. However, due to the soft nature of the plastic, some of that might be more difficult than you think. One of the kits in the series is of Leonardo's idea for a round, cannon-armed armored car. That would make an interesting diorama!

I'd like to thank MRC for supplying this review sample and IPMS/USA for giving me the chance at this fun project.

Other Da Vinci wonders
Previous Next