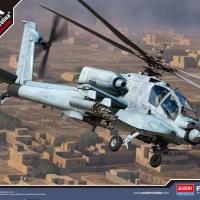 The AH-64 Apache helicopter is very recognizable from its unique shape and visibility from both Gulf wars. First flown in 1975, over 2400 have been produced. Academy has released a kit of the AH-64A Apache in large 1/35th scale. Based on the instructions, this a rerelease of the Kangnam kit as the instructions are very similar. That’s not a bad thing either as all new decals for the South Carolina ANG are included in an overall gray scheme.

Inside the box, there are five flash free gray sprues with nicely engraved or embossed detail. The rivet detail is especially nice. There is one clear sprue, a rubber fret with the tires on it, decals and a complete set of masks. Markings are included for:

The kit features a high detailed cockpit with pilot and co-pilot seats, M261 rocket pods, AGM-114 and a detailed 30mm chain gun. Instructions are straightforward it was time to dive in starting with the cockpit.

The cockpit consists of 16 pieces and the detail is good especially with closed canopy which is the only option. Sticks and seats with molded in seat belts are included along with instrument panels.  This is also an opportunity for the detailer to add more and open the canopy as the base is solid. There is a clear screen between the pilot and rear and this has a mask for it. The masks need cut out but work very well. Once built and painted, it was time for the tail rotor and main hub. These both assembled well with no issues. The instructions would have you attach the tail rotor but ease of painting, it was left off. I also assembled the main rotors and they also attached with minimal fit and sanding.

Once this was done, it was time to close the fuselage. The cockpit is trapped in place along with the main rotor base (which is part of the cockpit). Part C25 needs fit in the front of the fuselage and I had to work it several times to get a good fit. Once ready, I got out the clamps and glued the fuselage shut and left it sit and get dry.

The two side sponsons were added and both needed putty to fair them into the fuselage. Takes care of all the lovely raised rivets- it is easy to go overboard and sand them off. I added the horizontal tail but in hind site, I should have left it off for later. It is supported by one part and with masking and sanding, it can get wobbly. Plus, it fits really well and it would be easier to paint without it installed at this point. The main struts for the wheel; are added next. Make sure they are aligned. The pods for the engine are built and glued on and the fit is good with minimal filler. Same with the “wings”. I built the wings and pylons and added them and they required a bit of putty. Lots of hand holds and steps are included but they are left off for the moment.

The canopy was masked and fit well. Make sure to get it over the cockpit parts and glue in place slowly and only a little putty is required. Lastly is the bottom plate and when I tried to add it, It did not fit well. I found one reason is that I had pinched the sponsons in trying to get a better fuselage seam which made the opening too small. So sand and fill and fit test and repeat and eventually, it was in place. In hindsight, test the bottom plate at the same time as the sponsons and all will fit.

Once all the seam games were done, I added the hand holds and steps and all the “fiddly bits” and was ready for paint. I chose the Iraq version\. The two schemes were the same with the primary color being Dark Ghost Gray, FS35320 with the top being Gray Blue, FS35237. The paint diagrams were excellent and based on photos; these also bleached quickly so that you could go to town and weather them. Color details were picked out like the nose being black as well as stripes on the horizontal tail, the main rotors, and the jet exhausts being steel. All this dried and then got a gloss coat.

The decals are excellent and went on with Microsol and after a couple applications, they settled over everything. I added a little wash here and there to highlight details and then gave several flat coats. I added (without gluing) the top rotor and the wing tip lights and done

As I look at the kit, it is impressively large and the detail is good for this scale. I will say that with the fit issues which may be self induced, having a few kits practice before tackling this would be a good idea so it is recommended with that small reservation. I will say that it will be a show piece due to its size and distinctive look

My thanks to all the excellent people at Academy and MCR for the opportunity to review this kit.

Side View of Gun