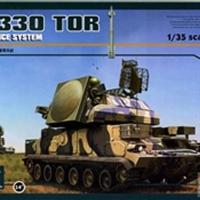 The 9K330 Tor is the newest vehicle in the Russian arsenal for self contained anti-air missile defense system. The missile system is the SA-15 Gauntlet and it is mounted in the 9K330 Tor tracked chassis. The vehicle has an integrated rotating search radar, a tracking radar in the front of the turret, antennas for guidance and 6 vertically stored missiles in the center of the turret. Interestingly, these missiles are stored internally and are launched similar to US naval vessels. In 2016, Panda Hobby released the original version of this kit and it remains the only styrene kit of this subject. This new release from 2019 adds replacement white metal tracks to the kit.

The kit is packaged in the usual Panda Hobby box with a colorful print of the vehicle in service. In the box are 6 sprues of tan plastic, 1 PE sheet, a clear sprue, a small decal sheet, 200mm of brass cable and a small plastic box containing all of the white metal track parts. There are also separate parts for the turret top, radar front, and hull halves. The moldings are well detailed and for the most part the parts are well molded. However, I did run into a number of issues with short shot parts and some instances of flash. I will call out the important ones as needed throughout the build. The instructions are typical for Panda Hobby, with glossy covers and paper insides. On the surface they look great with clear parts locations and breakdowns but there are a number of issues throughout that I will highlight.

I always start armor builds by skipping the suspension and road wheels until after the painting is complete. So with this in mind, I started on step 2 with the addition of some suspension parts to the lower hull. There are several parts omitted from this step, E40 is opposite of E39, E45 is opposite of E23, and E5 is used in place of E6 in some places. Overall the fit of the parts is good but care is needed here to make sure the correct parts are used.

In step 3, Part E7 is used but not called out and there are more of this part shown in use than are in the kit. it has you using 6 in steps 2 and 3 but there are only 8 included. I chose to fill the one in the center of the front plate in step 3. Also in step 3, it shows Parts E2 in use but does not refer to them in any way, they are the small flat pieces shown in the second part of the step. The last step of the lower hull is step 5 and there is another misprint here. The instructions call out for Parts D63 and D63 but there is no D sprue, Parts G73 and G74 are the correct parts. These parts are very thin and fragile with large sprue gates, so be careful.

In step 6, assembly of the upper hull starts and there is another error in the instructions. Part K22 is listed for the view ports. There are clear parts that are exact copies of K22, GP5, but there is no call out. I left these parts off until final assembly. You have easy access to install them if you leave the closest hatches off. I had no issues with the rest of the parts in this step but I left the cables and headlights off until final assembly. The hatches added in this step are emblematic of this kit, nicely detailed but unable to be posed open.

In step 7, PE13 is very tricky to bend because the instructions are a little vague and the part it attaches too, K23, can’t quite be used as a guide. The part attaches to the top of the PE with no groove. In this step I left a few parts off until final assembly, K33 was left off to provide access to the view port, K45/45 and L17/26 for painting. Step 8 has some more errors in the instructions. First, Parts K8 and K9 are swapped in the instructions and Part K9 may be a little short shot. it is missing some hinge detail that should be there. Next, K24 should actually be K51 and K23 should be K50. Lastly in this step, there are two issues with the lights, GP3 and L21. I found the fit of these parts pretty rough, if I were to build this kit again I would trim the pins off of L21. Finally, there are four off these lights shown on the front of the tank on top of K44/45 but they are not called out in the instructions at all.

I left both of the subassemblies from steps 8-9 off until after final painting. The last step prior to turret assembly is step 11. There were no major issues with this step but I have a few things to mention. Part PE6 was very thin and easy to bend, so care is needed when removing it from the fret. I left parts K42, K4, and K5 off until after final painting. Also at this step I recommend painting the interior of the kit black. There is no interior and you will be able to see the inside of the hull through the engine grates. After this step I attached the top of the hull to the bottom at this step, strangely this is left until the last step of the build. The only issue I noted here was that you could see straight through both of engine grates to the outside. I recommend blocking off the back of one of the grates with sheet styrene.

The final two assembly steps deal with the complicated build of the main radar array. This assembly is extremely detailed but fairly troubled. The parts are riddled with flash, short shots and instruction errors but with some effort the final product is worth it. Assembly starts in the top right corner of step 16 with the internal structure. Part G33 has a number of issues with short shot pins and other short shot parts. Also Parts G25-G28 are weirdly molded, some seem short shot but it’s hard to tell, I had to rebuild some of them with styrene rod. Part G1 had a ton of flash and the right side of the attachment point to G33 was very thin and mis molded.

The photo etch used in this step is very impressive but there are no folding lines for the edges. There were some gaps after attaching Parts G34/35 to the G46/18 assembly that required filling. There is also an error in the instructions in this step, Parts G32/G11 cannot be assembled as shown. There is a piece of plastic molded onto Part G46 that prevents the radar assembly from being added to the G32/11 assembly. You either need to swap the order of assembly or remove the ring from G46. The location or G12 is unclear and it is near impossible to install at the point shown. I had to cut the part in multiple pieces to thread it through the rear of the radar, It should be installed much earlier prior to adding G33. Finally, G42/38 is difficult to attach to the center parts and the whole assembly is very fragile.

Step 17 finishes the assembly of the radar. Part G70 is impressive but there is a ton of flash on the part that will need to be cleaned up. Parts G7-10 are swapped in this step, so pay attention when installing. Part G50 is extremely short shot but I was able to rebuild it with some flat styrene. I attempted to leave this radar assembly off until after painting and installing G30/54 into the turret. Unfortunately, the fit is super tight and I had to remove the pins to install the radar anyways. I had no major issues with the rest of the parts in steps 18-21.

Returning to the suspension and the tracks. I had no real issues with the installation of the trailing arms, but I left them off until after final painting to allow me to use the wheels to set the proper height. The one major issue I had with the suspension was the wheels. Most of the wheels seemed to be slightly mis-molded, basically short shot it the center of the tires. It seemed like not enough plastic or pressure was applied to fill the mold out. This leads to a lot of clean up work and should probably start with a fair amount of putty to fill the gaps. I would definitely recommend looking for resin replacements for the wheels.

The tracks are definitely the high point of this re-release. They are well molded in white metal and while there are some issues with flash, there are plenty of extra links and the flash is easy to clean up. The links are molded as a single piece and the track pins are included. The track pins are keyed to only fit one way, one end is too big to fit into the link. The instructions called for 114 links per side and this fit perfectly. I painted the tracks with several coats of Tamiya XF-69 NATO black and had no issues with paint adhesion after the tracks were washed with white vinegar.

Last but not least is the painting and decaling. The kit provides two options for this vehicle. The first option is a 3 color camouflage of black, olive green and tan with no unit markings. The second is for an overall olive green and the unit marking 403. All paint call outs are in Mr. Color paint codes with no references to other brands. I primarily paint with Tamiya acrylics and chose to paint the three color camouflage. The colors that I worked with were XF-58 Flat Olive Green, XF-69 NATO Black and XF-57 Buff. I had no real problems with the decals but as I have worked with Panda kits before so I took no chances and laid them down into pools of Future before rolling over each decal with a Q-tip to remove the air.

This is an interesting kit, overall it is a great kit and will build up to an impressive version of the vehicle. It has been said in other reviews that this is a great time to be an air defense modeler, we have a huge selection of kits representing a huge variety of vehicles and this kit fills an important gap. The build isn’t complicated but the errors in the instructions and the issues with the molding make the build more difficult than it needs to be. Due to the issues with this kit I can’t recommend it to a beginner. But if you’ve had a few kits under your belt and don’t mind a little trouble shooting and elbow grease this kit is definitely worth it.

Also I love the decision to include white metal tracks as standard, these are usually pretty high priced upgrade for an armor kit. They defiantly make this rerelease worth it and I hope more companies follow this example. I would definitely recommend this kit to anyone that is interested in modern Russian militarily vehicles or modern air-defense. My thanks to Panda Models and IPMS for giving me the opportunity to review this kit.