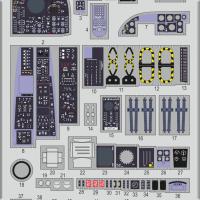 Having never built anything but “out of the box”, I was intrigued when I saw the availability for PE cockpit details for the Trumpeter A-6A. Having had the kit for a year, I stalled out very badly due to some poor build decisions on top of questionable engineering. I thought that getting these sets would potentially light my fire, so to speak.

The stock A-6 cockpit as provided by the kit, is no slouch. It was fairly well detailed. Unfortunately for me, I had it completely assembled by the time I picked up the PE sets. This greatly increased the difficulty as there was no easy way to remove the detail on the existing. As nasty of a job as it was, it came through okay in my opinion.

Now onto the parts. Not only was the fret I obtained the painted PE, but also self-adhesive. I had worked one other time with PE that was provided in a kit and found that as soon as they were stuck together with CA that was it. Combined with the issues of rough removal, I was scared to death. Now, I am a believer and cannot imagine doing a kit without Eduard PE. The self-adhesive gives somewhat of a “floaty” feeling that allows you to slide it around after application. The cut and fit is second to none. On the A-6, there are several steps on the panel, this fit every one of the nooks like a glove. The kit comes with all gauges, panels and seat components, all in pre-panted, self-adhesive PE. (Seatbelts reviewed separately).

Now, my only regret is losing both control sticks in the process, proving to me that finishing this build…is cursed. However, I will be using Eduard PE sets and suggesting them to anyone looking to add a great level of detail for not a lot of work.

As always, thanks to Eduard and IPMS USA for the opportunity to review this sample.