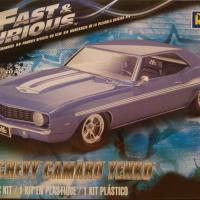 The model I am reviewing here is one of the cars out of the second movie in the Fast & Furious endeavors.

The story began back in 1967 when Chevy introduced its new pony car for the first time, the Camaro. Finally, in 1969, after Don Yenko had tried to convince them to let him build his idea of the ultimate muscle car those first couple of years, Yenko was able to convince the powers that be at Chevrolet to let him produce a special series of cars with enhanced performance characteristics under the GM COPO order program. He was able to purchase 201 of these vehicles. They were built in a factory in Pennsylvania. These specially built performance machines came equipped with a L- 72 427 C.I. big block Chevy powerplant combined with a four speed transmission, along with other performance parts and a deluxe interior unique for the Yenko design. Hence the Yenko SC Camaro was born.

This particular model was a fun project to build. I wanted to keep it all original. So it was built box stock. This is a fairly basic kit in that it only has 107 pieces to it. But all the pieces are well detailed and fit very well in place. When assembling it I used as many reference materials as I could find to try to match up the Revell version with the real thing. They did not disappoint in that aspect. The cars' markings are made true with the decals provided in the kit. The decals included all the side body chrome and marker lights decals that went on very smoothly. Also included were two sets of stripes, one black and one white. The car was blue in the movie, but I decided to go with a very bright Testors Flame Red Lacquer with the stripes being white. That was a tough decision for me because they came with both the black or the white offerings. Both look extremely sharp from all the pictures I'd seen of the real thing. After I'd used the white decals, I was thrilled that they did not bleed through like so many of them did all those years ago. I painted the chassis in my usual Matte Black. The bucket seats even had the correct Yenko logo for the headrests located in the decals. It has separate door panels that slide in place after you complete the detailing of the door handles and the like. The detailing was well inscribed so I could easily hand paint them. The interior was completed using Flat Black spray.

In all I recommend this model because of the subject matter as well as it can be assembled by both a skilled modeler who could put even more work into it or a relative beginner who can like I chose to, build it box stock.

I thank all the people at both Revell /Monogram and at the IPMS Reviewers Corps for giving me the chance to build this car for this review. Your hard work on producing and promoting these kits to the hobbyists is unsurpassed. Thank You for all your efforts.

View of the nice details in the chasis and drive train.

Head-on view showing the headlight and grill detail
Previous Next