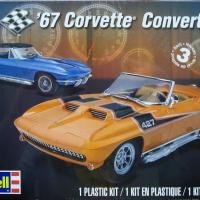 Thanks to Revell for providing the kit to IPMS and continuing to build and reissue good Corvette models.

The kit is another reissue of the Revell kit that was first released in 1995 and has been reissued many times since. The plastic sprues contain parts indicating copyrights in 1995 and 4/17/13. The kit shares parts such as the chassis and interior with Coupe versions of the ’67 Corvettes. Either a stock or race version of the Corvette can be built with the kit.

The kit has some fit issues and the molded detail is a little soft, but with some care a nice model can be built. It includes a 16-page instruction booklet, 217 parts, metal axle pins, stock tires, and alternative racing tires. It is molded in white, transparent red, clear, chrome plated parts, and soft vinyl black tires. The chrome plating is fairly heavy, which obscures some nice detail on the parts. The kit comes on 10 sprues plus one clear plastic sprue. All of the sprues and vinyl tires are bagged separately. It also includes a sheet of decals copyrighted in 2013.

The plastic is soft and most of the parts have little apparent flash. The molded detail is not very sharp and the molding is a little thick in areas such as the fan blades.

Two engine options are provided – a stock 427 big block with a tri-power three-carb intake system, or an alternate racing engine with horizontally opposed Weber carburetors and racing exhaust pipes. The rare L88 engine option for the ‘67 Corvette is mentioned in the description but is not included as an option. Aftermarket accessories could easily transform the engine to the L88 version.

The two hood options are a racing version with larger intake openings, as pictured on the box cover, and a stock Stinger type hood used on the 427 big block engines.

Assembly begins with the engine in either a stock or racing version. Modelers wishing to build the L88 engine, which differs mainly in the carburetor and air cleaner, can kitbash these parts from Revell’s ‘66 Penske Racing Corvette kit, #85-2863, or can use the L88 air cleaner accessory from Historic Racing Miniatures.

When gluing the cylinder heads to the engine block in step number one, use the manifold to space the heads, as the fitting is a little loose. I added the ignition wiring with painted wire to give the engine some detail.

In step number three, the underside of the axle assembly has a lug that needs to be removed prior to assembling. The halves of the differential do not fit well together and required sanding of the mating surfaces and some trimming afterwards to get the parts to align.

The engine block and underside of the chassis have nice textures that become apparent after painting.

The flanges on the exhaust headers are too thick, so I cut them off and glued the headers directly to the engine block. This requires some adjustment to the shape of the headers, which can be done by simply bending them closer to the engine. Wait until the body is installed on the chassis to install the exhaust pipes and headers to get them lined up accurately.

Step number one shows installation of fan blades on the engine, but many of the Corvette racing engines did not have fan blades.

In steps number six and eight, the washer bottle, part #20, and the brake master cylinder, part #82, want to occupy the same place when the kit is assembled. The washer bottle should be mounted as far outboard as possible to provide clearance.

In step number nine the seats should be installed first, before the door panels, otherwise they won't fit.

The body is nicely molded with crisp panel lines around the doors, headlights, and convertible top panel. Revell has done a good job aligning the mold seams with the fender bulges to form a nice sharp crease.

The Corvette logo, crossed flags, and ‘427’ on the hood are molded into the body panels, but are also included as decals. I decided to remove the molded-on pieces and just use the decals. Later, when the decals were installed, they were not very prominent so the molded-on badges should not be removed.

I used the Stinger hood from the stock version for this kit and plan to paint the underside of the hood body color, then mask off for the black undercoating. The hood has a large lug for the sprue attachment, which should be carefully cut off with a razor saw to maintain the sharp edge of the hood. The edges of the hood and body opening should be lightly sanded for a good fit and to allow clearance for paint.

I opened the air intakes on the Stinger hood with micro-drills and an X-Acto knife.

The kit was primed with a urethane primer, two-part urethane color coat, and urethane clear coat. After the first clear coat, the decals were installed and another coat of clear applied. The decals are thick and showed some silvering.

The vinyl tires are crisply molded and the stock tires have nice lettering on the sidewalls. I am using the race tires, so I scuffed them with sandpaper to remove the mold seam and to make them look used. The inside of the racing wheel is visible, so it needs to be painted.

The stock wheels use decals for the sidewall redline. I applied the decal, used Microsol and several coats of Microset to snug the decals down, then sprayed flat clear to eliminate the gloss. The stock tires with redline and raised lettering ended up looking very nice.

The front wheels are fixed and cannot be turned. Step 12 shows the wheels being installed without cement, but mine were too wobbly so I epoxied them in place. Five-minute epoxy gave me time to get the wheels lined up before it set.

The installation of the front bumper is vague and tenuous, resting on two small pins. The curve of the bumper also does not fit the shape of the body. The fender braces shown in step 15 did not fit, as they were not long enough to reach the bumper. This may be a result of the difficulty locating the front inner fenders which resulted in the chassis being installed slightly too far back. I fixed this by eliminating the bumper braces and super-gluing the ends of the bumper to the body.

The windshield is thick and the windshield frame is too large to be in scale. The vent windows and frames are way too thick so I left them off the model.

Overall, this is a good kit, but it has some fit issues, and the molded detail is soft in some areas but quite sharp in other areas. This kit would be a nice addition for Corvette fans or 60’s muscle car fans who don’t have one of the previous releases.

Again, thanks to Revell for supplying the kit and to IPMS for giving me the chance to review it.