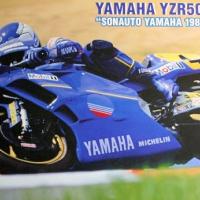 From 1973-2002, the Yamaha YZR500 led four 500 cc Grand Prix riders to ten separate world championships. One of the most famous riders to take the helm of the YZR500 was France's Christian Sarron. For the 1988 season, Sarron rode for the Sonauto-Yamaha team, scoring 149 points to earn a fourth-place finish overall.

Hasegawa’s offering of the YZR500 is a re-box of an earlier release, as a limited edition with new decals and new brake parts. There are 139 parts included in the kit, including a clear windshield, two rubber tires, four metal screws, a metal spring, and two colors (black and clear) of rubber tubing. The body panels and wheels are molded in white, while the other sprues are in a medium gray. Ten of the parts are not used, and there are two options for brakes (steel or carbon). The kit comes in a typical top-opening box, and the sprues are bagged in groups by color. There is also a very nicely printed decal sheet

Instructions are broken over twenty-three steps, and there is a separate sheet with decal guide, sprue maps, and paint chart. Colors are called out in Gunze Sanyo’s Mr. Color line, and Gunze Aqueous Colors are also listed in the charts. I used Mr. Color paints for the non-metallic colors, and Alclad for the metal surfaces. For the high-gloss finish, I used Gunze’s Super Clear Gloss.

Construction starts with the engine, which contains twenty-five parts. Details are nicely done, but there are quite a few mold lines to be removed. There are also quite a few pieces of tubing that are attached here. The connection points for the tubes are pretty fragile, and I ended up breaking several of them off later in the build. If you choose to display this model with all of the body panels in place, most of the engine will be covered up.

Next up in the build process is the frame, which consists of four major sections, plus an assortment of smaller parts. If you plan on leaving any of the body panels off, there are some significant seams on the frame that will need to be filled. Because it will be painted in metallic silver, any flaws in the seams will be glaring. The engine also installs at the point, and is secure in place by plastic pins. Once the engine is in, the radiator and its plumbing goes in next. There is a lot going on at the front of the frame, and it was tricky to get all of the pipes and wires in their proper places without damaging the paint.

The rear swing arm goes together next. The large rear wheel is a single piece, but there is a sizeable mold line that needed to be removed. The rear wheel is sandwiched between the ends of the swing arm, along with brake rotors and the drive chain. The chain has to be glued closed, and the location of the seam is about the most visible part of the chain. The swing arm is mounted into the frame, along with the rear shock, and is held in place with a long metal screw. Plastic covers go over the screw head to hide it.

The YZR500 has a four-cylinder engine, with an exhaust pipe for each cylinder. Each pipe consists of two halves, plus a two-part muffler. These pipes are exposed, even with the body panels installed, so the sizeable seams required cleaning and filling. I painted the pipes with Alclad Pale Burnt Metal. The mufflers are covered in decals; it took several rounds of Solvaset to get them to lay down all of the way.

Next up was the front fork. Again the front wheel needed to have mold lines removed. This is also where you need to decide if you want to go with steel or carbon brakes. I chose to go with the steel version. Once the fork is together, sandwiching the front wheel and brake rotors between the forks, it is installed into the frame. It is important to let this part dry overnight; the screw that holds the fork in place with the frame put a lot of tension on the fork. This is also where the handle bars and instrument package go on, along with finishing up the loose ends of the tubing from earlier in the build.

Because of the layers of paint and decals needed on the body panels, I actually built them concurrently with the rest of the build. While waiting for paint to dry on the body, I worked on the rest of the models. Because this model has a very glossy finish, it’s critical to get the seams taken care of properly. There are significant seams to deal with on the rear cowl/seat and the gas tank. Everything was primed with Mr. Surfacer 1500 (great stuff!), I used Mr. Color Bright Blue, as called out in the color guide, which is a great match to the bright blue decal that covers the lower part of the windshield. I applied the blue in several light coats before a final ‘wet’ coat. Once that was left to dry for a couple days, on went the decals. For the most part, they went on very smoothly, except for the large yellow panel that goes on the front of the bike. There are LOTS of bumps and curves on this part of the model, and the decal required many rounds of Solvaset to lay down. Even then I had issues with the decal splitting in a couple places. Once the decals were dry, I sprayed decanted Gunze Mr. Super Clear (also great stuff) over the panels.

Installing the panels, for me, was a real challenge. There are lots of fragile bits sticking off the bike at this point, and I ended up damaging several pieces, as well as chipping some of the body paint before I got everything in place. I chalk this up to more of my inexperience with high-gloss paint and motorcycle models than any problem with the model itself. The front panel, which attaches to the instrument cluster, was especially challenging. The end result is a nice looking model. It did not come out as nice as I had hoped, but not due to any real issue with the kit.

Cons: The body panels are tricky to install (especially considering the delicate paint), connection points for the tubing are fragile, and the front decal is tough to settle into place. Also, there are some large seams on the body panels and exhaust, and mold lines on the wheels that need addressing.

Recommended: This is a very nice kit, although the complexity of the body panels makes it a better choice for an experienced motorcycle modeler.

Thanks to Hobbico/Hasegawa for the opportunity to review this nice kit.