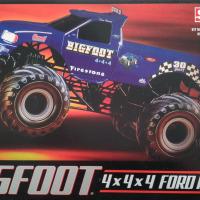 First introduced in 1979, “Bigfoot” started the monster truck craze that is still going strong today. Created and owned by Bob Chandler as a promotional billboard for his 4X4 truck accessory business, Bigfoot #1 was based on a Ford F-250 4X4. The real innovation came when Chandler built the first 4X4X4, which is a four wheel vehicle with four-wheel-drive and four-wheel-steering. Bigfoot pioneered the art of car crushing, now a common part of any monster truck event. While fans might take pride in the particular brand of their favorite monster truck, the only thing these trucks have in common with the brands they represent are the body shells cast to look like a Ford, Chevy or Dodge/Ram. These are in fact specially designed and built race trucks. Think funny car (a truck in this case) with a blown engine mounted in a sub frame designed with suspension travel that allows for driving over a van and you’ve got it. Twenty one Bigfoots have been built. For all you ever wanted to know about Bigfoot, check out their website at www.bigfoot4X4.com.

The kit comes in a top opening box sporting a picture of the finished model. A parts diagram on the bottom of the box shows 19 parts in plastic, four rubber tires and a decal sheet. Yes, a decal sheet, not the stick on type of transfers normally included in a snap together type kit. The body parts are molded in blue and the chassis and windows are in black. Two metal axles are included so the finished truck can mimic its full size namesake by rolling over whatever your junior modeler finds!

The following is my nine-year-old daughter Kira’s impression of this build: The first step was the tires and wheels. I had help from my Dad because I could not get them in. Then step number two was simple. We did not have to use a hammer to put in the metal axles. We had to use glue because some of the parts did not want to stay together. Then the hard part came. The stickers (decals) have to be put in water. We had trouble because they would break when we took them off the paper. Also, they did not stick to the model. My dad helped me save the ones that broke. We did some and then took a break to visit my Grandpa. We finished when we got home. I had a lot of fun with my dad building Bigfoot. I think most nine-years-olds can do this model if they have a little help. I hope I get some cars to do instead of just trucks.

It took about an hour and half to finish the kit. The assembly will require some glue, especially if this truck is played with. Kira was able to do most of the assembly on her own so the instructions did their job. The decals were a bit disappointing for the reasons Kira stated, as they are brittle coming off the paper and don’t want to stick or conform all that well. If not for setting solution and a very patient young lady, the decals could have gone by the way. Perhaps there is some wisdom in the good ole sticky decals. Overall we had a great time together while putting this kit together, and some more fun watching videos of the real Bigfoot crushing cars. This is a fun way to spend an afternoon with your son or daughter. Kira and I thank Round 2 Models for providing the kit and IPMS for letting us build it and play with…uh, I mean share it with you.

Kira with her completed model
Previous Next