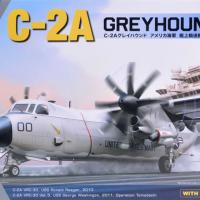 When Kinetic announced the release of a C-2A Greyhound, I was very interested after having seen VRC-40 Rawhides above the USS Carl Vinson last summer. When the opportunity came up to build one, I jumped at the chance.

Looking at the plastic, much of the kit is a carryover from their excellent E-2C Hawkeye kits, with the wings, engine and props duplicated. Included are a new fuselage and full interior, along with a back ramp. Molding and panel lines are excellent and I dove right into the interior.

Unlike the Hawkeye, this kit includes a full interior which is visible with the ramp in the lowered position. There is a full cockpit which is part of a one-piece molded floor to the plane and cargo area. I added only belts to the seats. Here I got confused when building the cargo area. The first drawing shows 5 sets of seats per side. The next drawing a few steps later shows 6 sets of seat per side. I only had 10 sets of total seats so I searched the sprue drawings and, sure enough, only 10 total sets of seats are included, even though there are holes for 12 sets. I went online and 12 sets is the correct number. You are short 2 sets. To fix this, I elected to put 6 sets of seats on one side and leave the other open for cargo. I added strips to the floor to replicate the tracks that exist and modified one of the left hand seats to right hand and added belts to all seats per the pictures one the Internet. There are excellent side walls and these were added to the fuselage sides. The cargo bin was built and is part of the top of the interior. This is blank, while the real one has a myriad of cables and wires, so I added these from tubing and copper wire painted appropriately. Once this was done, the floor, ceiling and the sides were trapped in the fuselage. Fit was tight but good. The instructions recommend that 50 grams of weight be added to the nose - ADD MORE!!!!!! This might work, but if you fold the wings, it is not close to enough. More on this later. This was left to dry. One modeler’s note here - there are several part numbers wrong here. If you try to fit them as shown, they will not fit – check the Internet or books frequently.

I proceeded to build the wings and tails and fit was excellent here, also. With the flaps separate, the parts count from the wings was high and I did not add all the pieces, such as the ailerons, to make painting easier. I used a layout area to keep the port and starboard pieces separate. Fit, again, was excellent. I constructed the engine nacelles and also had no fit issues. I added the wing and horizontal tail pieces, leaving the vertical parts off. I added the nacelles but, if I were doing another one, I would leave them off to ease the painting. Fit was excellent and, by adding them, I made masking difficult on the fuselage and interior of the nacelles. Landing gear doors and small antennae were left off at this time. By the way, I intended to fold the wings and followed that course but there are parts and instructions to have them extended. I chose folded for space reasons.

With pieces everywhere, it was time for markings and paint. Since I am building a collection of USS Vinson aircraft, I wanted to do VRC-40 "Rawhides.” I include several shots of the plane I wanted to do. The differences were in plane number, unit logo, pilot and DET markings, and the correct carrier air wing. After talking to a few IPMS members, they steered me to Keith Davidson at Red Pegasus Decals for help. I gave Keith pictures and a group logo and he printed paper markings first. I cut these out and indicated size to him and back came a perfect sheet of markings for the plane. I oversprayed these with clear. The paint job was an exercise in masking and patience. First, Insignia White was used to coat all the parts including the flaps, slats, ramp, landing gear doors – pretty much the entire plane, and this dried for 2 days. I masked the gull gray sides and scallop pattern at the bottom and sprayed that next. The top and bottom of the wings were sprayed that color, also. Lastly, I masked the black deicer boots on the tail and wings. Once satisfied, I gloss coated and added the decals. The kit decals are GREAT and so were the Red Pegasus. I sealed these, added a wash, flat coat, and weathering, and was ready to tackle the two tails. The "Rawhides" markings are black bottoms with a yellow/orange sunburst on the upper halves of the tail. This was shot yellow first, masked and sprayed orange and then masked again and the bottom shot black. It took a couple tries but in the end, looks nice. The props (Cuisenart style) are black with metal leading edges and a slime-light-colored tip for easy night viewing. Kinetic leaves raised ridges to help painting this, but the real props are smooth, so I sanded these off and painted the leading edges by eye.

I started final construction on the bottom and added the ramp and back doors – great fit again. I added all the little antennas and fuel dump also. Another problem here is that there is a large hole on the left side back by the ramp where it looks like something should go, but there is no mention of it in the instructions anywhere. Looking again to the Internet, it looks like a red light so I grabbed the spares box and fabricated one. I flipped it over and added the rest of the tail parts and inner flaps. All that was left was to assemble the wings and add them to the fuselage. I added the tail locks first and then slid those on the tail points and glued the wings in – it fit perfectly. Last, the props were added and the project was done.

I know there are some problems with the kit, but it is highly recommended for several reasons. First and foremost, the fit is superb – almost no filler used anywhere. Second, it was a much needed subject and looks excellent when done. You will need to watch for all the little parts and mislabels of pieces, but that is minor. My thanks to the excellent people at Stevens international for the kit and to IPMS/USA for a chance to review it. It also opens up endless possibilities for carrier dioramas...

I flew the COD back in the late 80s and early 90s and accumulated over a thousand hours. As far as I know our detachment is still the only detachment to circumnavigate the globe returning from the first Gulf War in 1991.

It would be perfectly acceptable for the cargo area to only have a few rows of seats and the rest reserved for bulk cargo and storage. The crew chief and loadmaster would configure the cargo are as required.

I look forward to building the model myself twice, once with the ramp open and interior visible and once touching down on the carrier deck catching a wire.

The aircraft was a joy to fly, while not sexy or fast, it was one of the best kept secrets of Naval Aviation for pilots and were among the best years of my life.