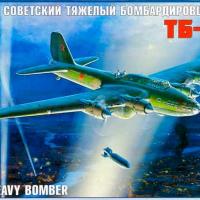 The Tupolev TB-7, originally known as ANT-42, heavy bomber was developed in the late thirties by the Tupolev Design team to provide the VVS with an up-to-date long range heavy bomber for strategic operations. Development was slow, partly because the Soviets never could ascertain exactly who their next enemy would be, or whether they should concentrate on strategic or tactical airpower. In the end, they decided on the tactical air force, putting the strategic bomber on the back burner. In the event, development of the design coincided with the 1937 Moscow Purges, which resulted in the arrest by the NKVD of Tupolev, Petylyakov, and many other competent Russian designers. Although they continued to work from prison, they succeeded in producing a state-of-the-art airframe which hindered only by the lack of suitably reliable powerplants. The result was a large, all metal, four engined giant in keeping with Tupolev heavy bomber tradition, capable of carrying extremely large bomb loads for respectable distances. The designation was changed in 1942 to Pe-8 to honor one of the designers, Petlyakov, who was killed in a plane crash during that year. He must have gotten back on old “Uncle Joe’s” good side by then.

Production finally began in 1939, and indecision on the part of the VVS air staff resulted in only 93 or 96 airframes being completed, depending upon the source. Initially powered by Mikulin AM-34 liquid cooled engines, since the preferred Klimov M-100 engines weren’t available, performance was not entirely satisfactory, and after some test flights with Charomskiy diesel engines, many TB-7’s received AM-35 engines, with which they were used operationally. Finally, a number of TB-7’s were re-engined with 1,380 hp. Shvetsov Ash-82 radials, and these variants were produced from 1942 until 1944, when all production ceased. It should be noted that by the end of the war, Tupolev had been given an example of the Boeing B-29, several of which had landed in Soviet territory, and since it was light years ahead of Soviet bomber development, the expedient of copying the B-29 seemed to have more promise than continued development of the Pe-8. I understand that Boeing is still waiting for royalties, but they’re not holding their breaths. There doesn’t seem to have been any designation changes on TB-7/Pe-8’s in VVS service, regardless of the powerplant. It would seem that if the Russians could have conned us out of some R-2800 or even R-1830 engines, they could have had a very effective heavy bomber. A number of long range bomber units used these aircraft during the war, and one brought Molotov to the US for negotiations during the war. Anyway, PE-8’s were used long after the war, and the last ones weren’t scrapped until the late 1950’s. I don’t believe any of them survived for museum display.

There is very little resource material available on the TB-7/Pe-8 series, especially those with radial engines. In fact, I have yet to find a photograph of the radial engine type. The definitive history of the Tupolev Design Bureau, by Gordon, gives scant coverage to the type, only mentioning the radial engine version but not even providing a photo or three view drawing. One photo of the prototype was included in the book, but nothing on the late version. Other sources, including on-line, don’t provide much information either, so you’re stuck with the drawings in the kit instructions.

Zvezda originally issued a kit of this aircraft in about 2008, and I built and reviewed it for this website. If I left anything out of this article, refer to the 2008 review, as it was very complete.

The only difference between that kit and this one is the inclusion of radial engines, props, and a few other parts. Otherwise, they are basically the same kit.

Molded in grey plastic, the kit is of excellent quality, with seemingly accurate outline and fine recessed panel lines. The kit is nicely engineered to avoid the usual sink marks, and assembly is relatively easy. That said, it is ESSENTIAL that you follow the instructions carefully, and keep track of the parts. If you don’t, you’re guaranteed to lose something, and some of these parts are mighty small. The cockpit interior, gun turrets, and landing gear assemblies are all quite delicate, and care should be used in their assembly. The wing-to-fuselage assembly is particularly well designed, however, and if you do it right, the unit will stay together for many years. You won’t need much filler, and sanding down the joints is easy. One good thing about the interior is that the instructions state to paint everything light grey. I used US Neutral Grey, which I believe is OK. Basic assembly goes smoothly if you follow the instructions, but one problem I noticed is that some of the parts are on different sprues (There are 8 different ones), and you’ll need to keep track of them. They are all in separate clear plastic envelopes, and I used masking tape to label each one, left them there until used, and that helped. Sometimes the instructions are confusing, as with the engine nacelles. For example, for the rear engine nacelles, part C-7 mates with C-9, and C-6 with C-8, not the way the instructions show it. The gun turrets require the guns to be installed before the turrets are attached to the fuselage, so this means that you have to be very careful. And don’t forget the gun turrets in the rear of the nacelles. Although several sources state that these were deleted when the radials were installed, and kit instructions make no mention of this, no other sources mention this issue at all. I just included them. The small windows need to be installed before the fuselage halves are joined. This could be done with white glue or Crystal Clear, although I went ahead and used the kit parts. The windows are mainly perfectly square, so masking them wasn’t a problem. One area that I had difficulty with was the nose cone, which has some interior detail that has to be inserted surgically into the cone. It also doesn’t fit the nose section exactly, and has to be filed down to mate properly. There is an awful lot of masking to be done on all of the windows, but most are rectangular, so this task isn’t as tedious as it might appear.

Unlike the earlier kit, this one was a night bomber, so the standard three color (brown, green, and black) scheme was used on top, with dull black underneath. Do the black last and you won’t use much masking tape, but be sure to do the windows first. This is a time-consuming job, and it took me almost as much time to remove the tape after painting than it did to initially cut and apply it. Decals are provided for only one airplane, a peasant presentation aircraft, and the decals are excellent. In addition, they require no trimming. There is a minimum of add-on equipment, including a radio mast, small antenna, and several venturi tubes. Once the plane is painted and detailed, it is time to pull off the tape and see what your handiwork looks like. Apply the major decals. The kit decals give a lot of maintenance markings, the “step here” and “fire extinguisher inside” but these are in Russian, so good luck here. Anyway, they are black, and since all of the decals on this airplane go on the underside, it is just best to forget these. I put one on the fuselage side, and I’m darned if I can find the bloody thing. Then the wing, fuselage, and rudder stars can be applied, along with whatever markings are appropriate for the time.

Having built both of these kits, I feel that they are not beyond the reach of the average modeler. They will take some time, but they are certainly impressive once you get them finished. You don’t see these often in a 1/72 scale model collection, but I’ve now got two, and they look pretty good together. Try one. It might catch on.

Thanks to Dragon Models USA, Zvezda and to IPMS/USA for the review sample.