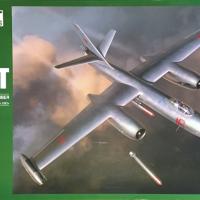 The long awaited IL-28T torpedo bomber is the first release of what will probably be a series of IL-28 versions from Bobcat Hobby Model Kits (formerly Xuntong Model). The parts are molded in a grey, slightly soft/slightly brittle plastic (more on the drawbacks of this later). Each of the half dozen sprue trees is individually wrapped in a resealable plastic bag. The kit has been well designed, and most of the parts themselves are highly detailed, even if the exterior surface scribing is a bit heavy. The pilot’s cockpit and bombardier’s compartments in particular are very well fitted out, and the landing gear and wheel wells are nicely detailed, as are the two different torpedo types (for a total of four weapons). The ailerons, flaps and rudder are positionable. Extra parts are included to have both the landing gear doors and pilot’s canopy either opened or closed. Two nose glazings are included, although the difference between them is easy to miss. There are even parts to modify the bomb bay doors to accept an in-flight display stand (not included in the kit). As there were no major external differences between the IL-28T and other marks, save for the torpedo mounting hardware, it appears that almost any major version of the Beagle can be built from this offering.

Where the kit begins to lose its luster is on the production side. The surface of the larger parts has a very fine but noticeable pebbly texture reminiscent of some older Trumpeter kits. The sprue gates are heavy and numerous, and rarely located in easy-to-hide places. Nearly every part, large and small, will need some clean up to rid them of flash, seam lines or both. Ejector pin marks abound, and some are quite deep. The parts fit is rough throughout. The roundedness of most of the mated surface edges requires considerable sanding to keep from having to fill the joints. None of these issues is a show stopper, but together they add up to a series of hurdles that slow down the build time after time.

As you leaf through the instruction booklet, you’ll notice the unusual assembly sequence, unusual in that it doesn’t seem to follow any logical sequence at all. It starts with cockpit/cabin parts - bombsight, ejection seats - then jumps to wingtip tanks, then wheel well assembly, wheels, torpedos - before returning to some more (but not all) cabin parts. Then to engines - cabin instruments - more engine assembly - more cabin parts assembly - you get the picture. A real roller coaster ride. I found it easier to familiarize myself with the parts and overall assembly, then set up my own assembly sequence, paint and detail each group of parts en mass, then assemble in a logical progression that I was more familiar with. Still, mistakes were easy to make, and so I made them.

Assembly is fairly straightforward, once you’ve determined a logical construction sequence. The nature of the plastic in this kit did require me to alter my usual assembly technique in a major way: normally, when glueing major pieces together, such as wing or fuselage halves, I’ll match the halves, clamp or strap the pieces together (with clothes pins and rubber bands) all along the mated surface, then apply a liberal stream of Testor’s liquid cement and give them plenty of time to dry (typically overnight). In the first of these assembly steps - the engine/wheel nacelles - my return the next day found several places along the mated surfaces where the plastic had crumbled, flaked or fragmented. Even one of the main wheel halves cracked. Repairs were frustrating, time consuming and not always entirely successful. I had to be particularly careful how much glue and especially how much pressure to apply. Often, a simple rubber band holding two parts together was enough pressure to cause the plastic to buckle. The remainder of the build progressed at a slower pace with smaller areas glued at a time, and longer wait times between assembly steps. I hope that my example is a fluke. Other builders of Bobcat kits that I’ve spoken to didn’t mention this kind of issue, so I’ll assume that it is. But from now on, I’ll look at my other Xuntong kits in the stash with a wary eye.

This is one of those aircraft kits that would have you attach the landing gear legs early on in the build. I’ve done this before, with mixed success. After attaching and breaking off the front gear leg, I opted to hold off on attaching the main gear legs, once I had determined that it was possible, though difficult, to attach them after the housings had been assembled (I ended up making this a lot harder on myself by installing the wheel wells in the the wrong nacelles. There are pitfalls like that throughout the assembly). I also opted to save myself some frustration and go ahead and break off several small antenna that were molded on the fuselage halves, and replace them later. The rear gunner’s compartment is a separate module, intended to be assembled and attached to the fuselage as a whole unit. I chose instead to attach each half of the compartment to its respective fuselage side first, then fit each completed fuselage half together. This bird is a definite tail-sitter, so weights were added in hidden areas behind and under the cockpit.

Most of the schemes that the IL-28 flew in were either natural metal or silver lacquer finish, although some middle eastern countries provide some strikingly colorful alternatives (and thereby ease the painting/finishing process due to the somewhat rough surface texture). I had decided that I would build this as a Finnish aircraft even before I had started assembling it. The interesting color combination of day glow orange and silver lacquer paint combined with the general shape and outline of the aircraft give it an almost spaceship-like appearance. Besides, it fits in nicely with my growing family of Finish Air Force aircraft. Because the Finns used them primarily as target tugs, I scratch build the necessary towing gear. The only other added parts were some padding on the bombardier’s access hatch and tape seat belts. The kit includes decal options for several Russian or Chinese aircraft, with little stenciling and no instrument decals. My Finnish roundels were from SBS Model, and the numerals were custom made on my printer.

Overall, I’d have to give this kit a mixed grade. This is a complex kit with a lot going for it. The detail, as well as the overall shape and “look” of the aircraft is very, very nice. It offers a lot of promise for producing a striking looking finished aircraft. However, the fit and plastic issues really cut into my enthusiasm for it. As I progressed through the build, it reminded me more and more of one of the old Monogram kits from the 80s and 90s - strong on detail, short(er) on production values.

Thanks to Lucky Model and IPMS for the opportunity to build and review this kit.

Right Side Forward
Previous Next