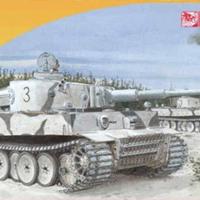 OK, so the real kit name is Pz.Kpfw.VI Ausf.E Tiger I Initial Production s.Pz.Abt.502 Leningrad Region 1942/43, but I was not going to squeeze that in above. This is another very impressive release from Dragon in 1/72 scale, and as with my other reviews in this scale, the level of detail is on par with what the company does in 1/35 scale. This release also includes a fret of photoetched parts, a length of wire to make tow cables with, and one-piece Dragon Styrene tracks. 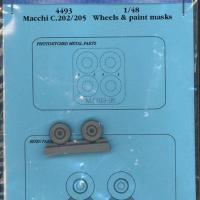 Aires has release a number of resin detail parts for Macchi WWII fighters in 1/48 scale. Among them is a set of wheels (with paint masks) for the Macchi C.202/205. The wheels are molded in the familiar medium density gray resin that Aires uses and they come on a common casting block. The wheels can be removed easily from the casting block with an x-acto knife or a small saw blade. The detail is crisp, delicate and convincing. No clean up is required and there are no pinholes to worry about. If care is exercised when removing the wheels from the casting block, the subtle tread pattern can be preserved.

The paint masks are a bit rigid and do not actually conform to the deep radius of the tire sidewall near the wheel hub. However, they do a good job of protecting the tires (that the instructions will have you paint first) before you airbrush color on the hubs. 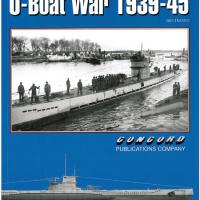 During World War II, one of the most publicized branches of the German armed forces was the U-Boat Command. At the beginning of the war, the submarine service was unprepared for the conflict to come, and as the war began, a rapid expansion took place, with U-boat construction and crew training assuming a rapid pace. The Germans never had enough U-boats, and as the war progressed, the Allies were able to develop countermeasures, such as long range aircraft, convoy escorts, and the decoding of German Enigma traffic, which slowed down and eventually overcame the effectiveness of the U-boats against Allied shipping. Although over 1,100 U-boats were built, over 800 were unsuccessful or never saw action, but nevertheless, only 30 U-boat commanders accounted for about 800 of the total of about 3,000 merchant and naval vessels sunk by U-boats during the course of the war. And tragically, of the 38,000 men that went to sea in U-boats, only 8000 survived the war. 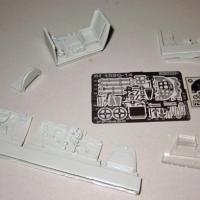 Anyone who knows me knows I love the Bf-109 so when given the opportunity to review this set I jumped. Aimed at the Academy G-14 this is molded in light grey and clear resin, the cockpit set consists of ten grey resin pieces, one clear resin piece, a fret of PE and a clear acetate film. The level of detail is exquisite.

The resin side walls contain some of the best looking detail I’ve ever seen in a 109 cockpit. The modeler will have to do very little to get a great looking cockpit. Simply adding some PE parts and a good paint job would make this a good first upgrade for someone breaking into the aftermarket for the first time. One unique thing is the inclusion of a clear resin piece for the head armor. This ensures that the thickness of the armor panel is quite appropriately thick. Simply add a piece of PE to the top of it and the look is complete. 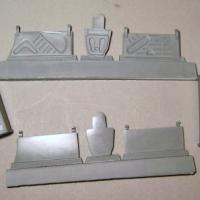 Designed for the Hasegawa kit this wheel well set is molded in light grey blemish and bubble free resin. The set includes two wheel wells and the six landing gear doors. Not included is the tail wheel well. The detail inside of the wheel wells is remarkable and suitably impressive. The hydraulic plumbing is very well represented. The actuators are represented and the modeler will have to use a wire to show the moveable part but that is very easy for any modeler.

Although designed for the Hasegawa kit this set should fit the Academy F4U-5 as well. I’m not familiar with any significant differences in the wheel wells. With careful painting the detail included should be quite noticeable.

Thanks to Aires and IPMS/USA for the review copy