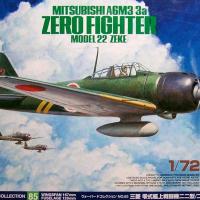 Following the Zero Model 21 (A6M2), the Model 32 (A6M3) Zero was introduced and entered service in the summer of 1942. It was powered by a Sakae 21 engine which featured superior high-altitude performance and an increased top speed. However, the Model 32’s reduced fuel capacity, heavier airframe design, and shorter clipped wings reduced the flight range. In order to fix this problem the Model 22 (A6M3) aircraft was introduced in early 1943. It came with an improved 12m wingspan to correct performance shortcomings and increase maneuverability, additional inner-wing fuel tanks to regain a longer flight range and reintroduced folding wing tips. Deployed mainly to the Solomon Islands from early 1943, The Mitsubishi A6M3/3a Zero fighter was considered by many to be the most well balanced Zero aircraft.

My sample arrived in Tamiya’s smaller size aircraft model box featuring a nice box-top illustration. Inside I found the contents to be well protected in poly bags. Upon doing a close inspection of the plastic parts revealed them to be flawless and flash free. The level of detail is remarkable for a 1/72 kit. Also included in the box is a well printed B&W instruction fold-out sheet, a B&W background information foldout sheet, poly-caps and decals for 2 kinds of decal markings

The build was easy; I just tossed a tube of glue into the box and shook it up until I counted to ten. After that didn’t work I decided to give it the old school try and build the thing like any other model airplane. However, it was different. I have no complaints about this one. The pieces just fell into place I encountered no problems whatsoever and enjoyed the project from start to finish. Tamiya straight forward instructions are fundamentally presented insuring a trouble free build. The parts clean up easily and without compromising any fine details. During construction all the major parts seemed to effortlessly align and correctly square themselves. The cockpit is highly detailed and comparable to any after-market resin offering, plus the kit supplies decals for the instrument panel and seat belts.

To quote Tamiya online, “The Tamiya 1/72 scale model captures every detail of this historic war bird” and I find myself in total agreement. I highly recommend this one to everyone.

Thanks To: Tamiya and IPMS for the opportunity to present such a fine model kit.