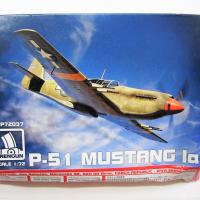 Upon opening the box you should find a bag containing 2 sprues of grey, one sprue of tan and a sprue of clear plastic. Also included are a resin piece, decals and a two-page instruction fold out. The plastic looks cleanly molded but has some thick mold seam lines. The clear parts are clean & clear, and the resin intake is molded nicely. The decals are printed cleanly and in register.

For a kit with few parts this has a good bit of detail, especially in the pit. I will go through the basic construction of the kit itself even though I add the Brengun photo etch set for this review. The cockpit is made up of 10 parts with some nice detail molded in the sidewalls. Test fitting is a must for this kit as there are heavy mold seam lines that need to be cleaned up or you will NOT have fun! Before closing up the fuselage you will have to add the tail wheel support and radiator & radiator outlet flap.

Next up is the wing assembly and this is where my first major problem hit. 6 parts make up the wings (lower section, 2 upper halves, 2 flap and the wheel bay) and in my sample the lower wing had a bit of extra plastic on the left wheel bay opening and the right side of the wheel bay piece. Also, the left flap was warped badly, and I could not straighten it out all the way. I had to thin the ends of the lower half of the wings so they would sit flush (the upper halves have the upper & lower wing tip molded together so your seam is on the underside of the wing).

Next up you attach the wing to fuselage (just a bit of cleanup here but no problems), rudder and intake trunking. The landing gear are shown to be assembled at this point and this was my next problem area. The struts need a lot of clean up and are fragile, luckily I only broke one of them. The horizontal stabilizers have just a small tab to place them on the fuselage and that also needs a bit of cleanup for them to fit right. The resin radiator intake is nice, but my sample was smaller than the attachment area on the fuselage, so a bit of sanding needed to be done. Last is the one-piece canopy and I needed sand a bit and still it sits a little high.

You are given 4 marking options for this kit.

The decals worked well and set down nicely with a little help from MicroSet.

Even with all the problems I had with this kit I still recommend it to experienced modelers. I butchered it and it still looks pretty good.

I would like to thank Hauler-Brengun for providing this kit and the review corps for not only letting me build it but putting up with my delays in building it!