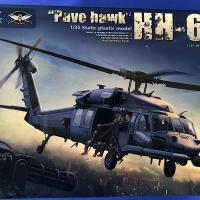 Pave Hawk combat enhancements include a radar warning receiver, infrared jammer and a flare/chaff countermeasure dispensing system. HH-60G rescue equipment includes a hoist capable of lifting a 600-pound load (270 kilograms) from a hover height of 200 feet (60.7 meters), and a personnel locating system that is compatible with the PRC-112 survival radio and provides range and bearing information to a survivor's location.

Most of the differences between the Black Hawk & Pave Hawk are in the electronics and mission specific gear, so there are a lot of shared parts between Kitty Hawk’s kits. Instrument panels and consoles for both the kits appear to be identical, but the Pave Hawk kit does include additional equipment racks in the main cabin.

The Pave Hawk kit comes on eight light gray sprues, one clear plastic sprue, photoetch fret, two decal sheets, and two resin pilot crew figures. The photoetch fret of crew seat belts included with the KH Blackhawk kit is not included with the Pave Hawk. The two fuselage halves are packed loose and individually bagged. All of the plastic sprues are individually bagged by sprue type. All of the sprues, including the clear sprue, are marked HH-60L so they are shared with the earlier Black Hawk kit. The photoetch and decals come in a separate Ziploc bag. The decals are labeled for the HH-60G Pave Hawk, are nice and sharp, and the decal film is tight to the image. The clear plastic sprue is in a small cardboard box, and the two crew figures are in a small manila envelope. The crew figures are molded in one piece and have very good detail. The instructions show head mounted vision goggles for the crew figures, but I did not find them included with the kit.

The center of the instruction booklet is a double-sided two page spread with the painting and marking guide. Two marking options are shown:

The first assembly steps 1 and 2 are for the crew seats in the main cabin. Only two seats are shown to be installed for the window gunner positions, but there are 10 extra seats left over from the Black Hawk. The seats are the early canvas type rather than the later fiberglass seats. Struts are provided mounting the seats to the floor, and straps to hang the seats from the frame above. Kitty Hawk shows installing the seats to the underside of the ceiling first and then connecting to the floor locations later after the ceiling is installed. I thought it would be difficult to get the floor struts in the correct location this way, so I installed the seats to the floor first and the ceiling straps lined up nicely with the frame later when the ceiling was installed. I also added 28 ga. wire cross bracing under the seat as shown on reference photos. The seats do not include the pouch typically hanging on the back of the seat, so I made some from Apoxie Sculpt. No seat belts or harnesses are provided for the gunner seats. KH calls out sail color for the seats, but they should be gray and black with a silver blue color for the pouches.

The ceiling is assembled in step 3. KH molds the entire ceiling with all the panels in place, but most reference photos show the ceiling panels removed exposing all the wiring detail above. The ceiling is shown to be painted flat black, but it should be gray. I added wiring detail and some equipment boxes in the open portions of the ceiling. Kitty Hawk includes a frame for the Fast Rope System and a separate frame for hanging the gunner seats. The rope frame for my reference aircraft is a different configuration so I modified the KH frame. I also mounted the seat support frame with the crossbar forward. Holes for the ceiling frames needed to be drilled out but the parts all fit nicely other than that.

The side panels for the gunner positions are built up in steps 4 and 5. The joints between the panels and both the floor and ceiling needed to be loosened to fit properly. There is a considerable amount of exposed wiring on Pave Hawks that could be added to these panels if desired. I checked the placement of the gunner seats & windows with LiveResin figures. The figures were tight (due to some of the added wiring) but did fit and can be installed through the windows after the interior is installed in the fuselage.

The outside of parts D34 and D35 should be drilled out to create openings. The pilot side armor plates, parts D50 and D55 don’t have the detail of the actual aircraft. The pins for mounting these plates are fragile and need to be trimmed so the plates fit correctly.

The main cabin floor is nicely molded with textured abrasive strips and recessed floor anchors. Kitty Hawk calls out flat black for the floor but it should be gray with a slightly darker gray for the non-slip strips. I masked the floor and plated painted the non-slip strips a slightly darker gray. I used hairspray under the darker gray to provide some highlights for the worn areas. The floor anchors were highlighted with silver paint.

Robertson (Robbie) fuel tanks are provided in step 9 for aircraft that are equipped with the auxiliary tanks. Photoetch straps are provided for the tank tiedowns. The illustration diagram suggests the straps are fastened in a web like the actual harnesses, but in fact they are separate photoetch strips. Not all of the PE strips are numbered and many more are provided than apparently needed. I’ve noted how I arranged the straps on one of the attached photos. Some of the straps attach to the rear bulkhead and side panels so I installed the tank first before anchoring those straps. I scraped off the molded-on anchor hooks on parts B28 and B29 and attached parts F3 for anchoring the straps. Nicely detailed piping is provided for the auxiliary tanks.

The instrument panel is installed to the underside of the glare shield in step six. Tabs on the panel extend through and are exposed on the top surface of the glare shield so they will need to be filled in. Parts F32 should be installed on the underside of the glare shield and their mounting holes filled also. The cockpit instrument panel is nicely molded with raised features for the various controls and gauges. A decal is provided to provide additional detail for the panel. The decal is in one piece but will settle down with decal solvent and a few slices. I added Future to the display screens for a glossy finish. The decal film leaves a semi-matte finish, which in hindsight should have been given a light matte clear coat.

Step 8 assembles the center console, instrument panel, pilot seats, and floor mounted controls to the floor of the Pave Hawk. Decals are provided for the center console instruments also. Some of the mounting holes need to be cleaned out, but otherwise all the parts fit nicely.

This is a good time in the assembly to check the fit of the pilot figures.

Two pilot figures are included with the Kitty Hawk kit. By rough measurements the pilots are about 5‘6“ tall. The pilots are wearing flak vests with a side arm, and helmet without a visor. The figures have good detail and are molded in one piece. The facial expressions are not very expressive. I compared the pilots to those from LiveResin, and the LiveResin figures are about 3 inches taller and much bulkier. The LiveResin figure has a HGU56/P helmet with visor down and two cyclic stick options. The detail on the LiveResin figures is much crisper and includes more accessories. The Kitty Hawk figure does not appear to be wearing a harness, while the LiveResin figure does have belt and shoulder straps. Photoetch lap belts and shoulder harnesses are provided for the Kitty Hawk figures but would not fit over the one-piece molded pilot figures. The belts could only be used on the seats without the pilot figures.

Step 12 shows installation of the equipment racks and Robbie tanks to the to the floor panels. The rear bulkhead and front cowling are shown installed here but that doesn’t happen until the next step.

Final assembly of the interior occurs in step 13. This step shows installation of the rear bulkhead and cabin side panels to the floor but shows the gunner side panels attached to the ceiling. This seems like it would be difficult to get the floor and ceiling together, and I already had the gunner seats mounted on the floor, so I am mounted the gunner side panels to the floor and then installed the ceiling. The joints between parts are very tight and needed some cleanup to get everything to fit together tightly. It is important to get these panels set tightly to help fitting the fuselage halves later.

Instructions show installation of the pilot figures at this step. However, both the Kitty Hawk and LiveResin pilots can be installed through the front windshield opening after the interior is installed in the fuselage to facilitate painting.

The Kitty Hawk kit builds up into a very nice, accurate interior assembly and with some additional wiring and other details will make an impressive Pave Hawk model. The part fit is generally good but does require some cleanup of mounting holes and tabs. Assembly of the side panels and ceiling is fairly difficult. The complexity of the kit would be challenging for beginning modelers and is better suited for modelers with more experience.

Thanks to Kitty Hawk for continuing their series of 1/35 scale helicopters and providing this review sample to IPMS.

Next steps are the nicely detailed engines and exterior of the Pave Hawk.