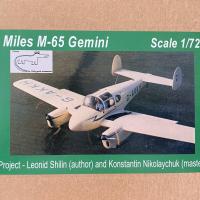 Yet another beautiful kit from Leonid Shilin and Konstantin Nikolaychuk aka, Croco models. This is the third kit I’ve reviewed from these gentlemen and they continue to produce subjects the big companies never will. This time around we get a fantastic replica of the Miles M-65 Gemini, a light twin with some novel design features I’ll get into later. The Miles aircraft company started in the early 1930s and consisted of Fredrick George Miles, his wife Maxine and his brother George. Known for some interesting designs of both light civilian and several specialized military aircraft that were used for training and target tugs for gunnery practice. Examples of the later include the familar Martinet, Magister and Messenger. The Gemini included some of the elements Miles had used in other designs including trailing beam landing gear, fixed slats inboard of the engine nacelles and separate flaps that simplified the wing structure while increasing the wing area. Combining these features with the smooth structure constructed primarily of wood resulted in respectable cruise speeds while also allowing excellent short and soft field operations. In total, 170 examples were built and several preserved, flyable examples can be seen on Utube videos. Two of the aircraft marking options in this kit have numerous videos and photos online.

This is a full resin kit. The castings are very clean with very few bubbles. Some parts have alignment pins while other don’t. My advice is don’t assume everything is going to fit like a mass production kit would. That said, this kit actually fit together better than the other two I’ve built. The canopy is a vacuform part and a small photo etch fret provides a flap actuator and pitot tube. The instructions are a single page, double sided sheet. Three marking options are provided on the decal sheet and the placement of them is shown on a small marking and color guide printed on photo paper.

Construction is fairly quick but make sure you carefully align everything and expect to need some filler. The most difficult part of this kit was blending the vacuform canopy into the fuselage. The profile of the part didn’t quite match the profile of the resin so it was a bit of work to blend it in. There is a basic cockpit consisting of seats, control sticks and instrument panel. Don’t cut off the protrusion between the front seats as it’s the elevator trim wheel. There are also small protrusions on the cockpit sides that represent the dual throttle controls for both front seats. The nacelles fit the wings very well as did the complex main landing gear legs.

All of the marking options are a single color with markings provided as decals. I chose G-AKKH finished in an overall off- white color that I mixed from Vallejo white and brown. One issue I noticed after I pulled the masking off the canopy was the side windows are not quite aligned. Careful comparison of the two sides during masking will solve the problem. Consistent with the other kits I’ve built from Croco, the decals went on perfectly and fit the spots they were supposed to be in. The only additions I made were, foil seat belts, fixed slats from plastic card, beacon light on top and a VHF and VOR antenna.

As with my previous experiences with Croco kits, this is another opportunity to add a rare aircraft to your collection. If you love general aviation aircraft like I do, it’s especially welcome. However, you will have to put some modeling skills to work here. Blending the vacuform canopy into the fuselage is the biggest challenge. Patience will pay dividends in the form of a truly graceful looking little aircraft. Highly recommended if you don’t mind the challenges I’ve raised. Thank you so much to Croco for the sample of this beautiful kit and to IPMS for sending it my way to build.