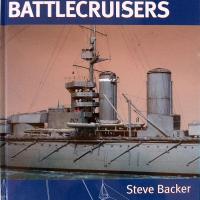 The genesis of the modern all-gun warship occurred when Jackie Fisher, who was for a time Great Britain's First Sea Lord, serving with Winston Churchill, First Lord, during WWI, designed the first fast, big-gun battleship named HMS Dreadnought, a name subsequently given to all ships of that class. Fisher was determined that the prime characteristics of a superior warship were found in two things: speed and firepower. Consequently, this same thinking that produced the Dreadnoughts also created the first Battlecruiser, HMS Invincible, which was basically a somewhat smaller, faster ship, more lightly armored than the battleships, but almost as heavily armed. As the Dreadnoughts made all other battleships obsolete, so the Battlecruisers made all other cruisers instantly obsolete.

Basically, once warships had sighted one another, the fastest with the longest ranging guns would destroy the other. For example, HMS Invincible carried 12” guns firing an 850 lb projectile 16,400 yards (8 miles+) at maximum range and could reach 26 kts., much faster than ordinary cruisers. Later classes of battlecruisers, such as HMS Renown, carried 15” guns, firing projectiles of 1920 lbs a maximum range of 23,700 yards (almost 12 miles). And she could chase you down at 31 knots.

These ships have been poorly represented by mainstream injection molding modeling companies, and sadly so. However, there are a few model companies producing these turn-of-the-century ships in resin, and with some kits, PE, with outstanding detail. Combrig of Russia leads the small group, along with H-P Models of Germany, NNT also of Germany, and Admiralty Modelworks in Winter Garden, Florida.

The subject of this review, a magnificent book by Seaforth Publishing and authored by Steve Backer, is one of those rare, well done combinations of history, reference, model kit evaluations, modelers’ showcase, and chapters on color schemes, appearance, plans, and selected references.

The book is rife with photos. There are many period photos of the battlecruisers that serve as great reference material for modelers who are building one of the kits. These mainly accompany the history of the design and operations of the type before and during WWI. Having read Massey’s Castles of Steel, which is a detailed and readable history of the war between Britain’s Grand Fleet and Germany’s High Seas Fleet during WWI, I can say that Backer’s historical summary of this period as relates to the Battlecruisers of both navies is brief but well done.

There follows a chapter on model products in which Backer briefly reviews the resin kits available from the companies mentioned above in 1/700 and 1/350 scale. Each small review is accompanied by nicely done color photos. I would feel very comfortable buying a kit based on his brief review. Next is the modelers’ showcase, in which there are many excellent photographs of battlecruisers built from kits, scratchbuilt, and built by professionals for the ship builders to promote their work.

Unique, I think, for books like this is a section on “appearance”. Since an individual ship, and different examples of the type, change through their service lives, some characteristics important to modelers and historians vary or come and go over that period. Backer has devoted a chapter to these changes, accompanied by tables and line drawings for each ship and class to explain those changes in “appearance”, especially for the modeler who desires to reproduce a ship at a definite point in its service life. This includes a section on color and camouflage, which is a topic rarely discussed for WWI warships.

Admittedly, I have an interest in this type and period of warship and have found this to be a prime reference for modeling these ships. I expect I will have one of the 1/700 scale battlecruisers in my stash at some point, and Backer’s book will help me chose the kit and build it to the level of detail I like. I highly recommend this book to anyone interested in the genesis of the modern warship, whether a modeler or history buff. Many thanks to Seaforth Publishing for providing this review copy.