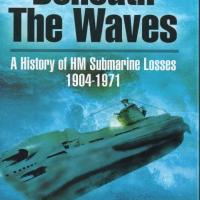 This new Pen & Sword book from Casemate Publishing is about all of the British submarine losses from 1904 – 1971. Starting from the A1 (1904) to the Artemis (1971). Having been a submarine sailor myself for 14 years, I’m always looking for new and informative books on the subject. When I saw that there was a new Casemate book coming out I knew that I had to have it because I have very little on the British side and because of the high quality of Casemates books. Their books are very well bound and have high quality glossy pictures.

The book is divided up into 5 parts and 2 appendices. They are:

I really like the way that this book is laid out. It isn’t just a bunch of facts; it has first-hand accounts from survivors about their escapes and also the accounts from the crews that sank them. These are also backed by log reports and communication logs. The stories of the brave men and their submarines kept my interest and I was unable to put it down. The appendices were also an added plus. Appendix I has the losses divided by chapter/part and by ship name, date of loss, commander, and how it was lost, if known. Appendix II was also well done, explaining the escape systems of British submarines. It had some wonderful drawings to help show how these systems worked.

I highly recommend this book for the very well researched information about the losses of the British submarine force and for the clear and concise way that the information was presented. Mr. Evans should be commended on his efforts in doing such a wonderful book, it is a lasting memorial to all the brave British submarine sailors who gave their lives for their country and are on eternal patrol. I’m proud to add this volume to my submarine history library shelf.

Thanks to IPMS/USA and Tara Lichterman at Casemate publishing for letting me review this book.