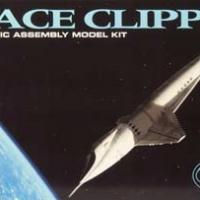 For years I have wanted to replace the old Aurora kit of the Orion III that I lost years ago but the cost was too high and the old Airfix kit has several accuracy issues. But now my wait is over as Moebius has released their second kit from the movie 2001 and it is a beauty.

The new kit of the Orion III Space Clipper is very simple to build with only 12 white plastic parts and 5 clear parts (and that includes 2 pieces for the stand). The parts are well packaged with the tail parts extra protected for the tail prongs. Unfortunately, one of mine was bent but a little finger pressure put it back in line. The fit is pretty good though I still had a little trouble matching up the fuselage seams and there were gaps between the upper wings and fuselage. I used some styrene strip to fill the later.

No interior is included and at 1/160th scale, it isn't necessary in my book. However, if you really feel the need to add one, there are few available from aftermarket companies. I just painted mine flat black. I also used flat black for the scoops in the wings and the engine exhausts. The overall color is white and I used my favorite Wal-Mart brand rattle cans, first a Flat White for the base coat and finished with Gloss White.

One thing you notice on the kit molding is that there are not that many panel lines. Moebius decided to show these using decals. This gives you the option of scribing your own, masking and painting them in different shades or using the kit decals as I did. The decals are a little thick but that helps out with the large panels that need to be placed. There is a lot of carrier film on these so make sure you have a glossy surface. I over coated my gloss white with Future just to make sure.

The decal placement guide in the instructions is really vague on where to place these panels. I used the box art, pictures from the web and just eyeballed them in.

The only real downfall of the kit is the lack of the Pan American markings as seen in the film. I understand the licensing fees where the cause of this but they are really needed to recreate the filming model. Luckily the aftermarket comes to the rescue with several choices. I picked the set from Acreation Models which worked well.

Another coat of Future to seal in the decals and a final Testors Dullcoat to finish it off.

Once again I have the Orion III cruising above my shelf.

Thanks to Moebius Models for the review samples.

Port side of completed model from aft