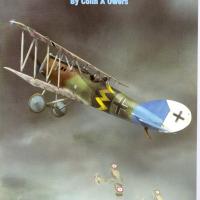 The Pfalz D.XII was the logical development of the line of Pfalz fighters developed for the German Air Service during World War I, and it was tested and entered limited production towards the middle of 1918. The superb Fokker D.VII was already in mass production and widespread service, and the Pfalz product, while close, was not quite up to the Fokker standard in speed and maneuverability, only exceeding the Fokker in maximum diving speed. A clean two bay biplane, entering service when the steel tube fuselage D.VII was in service, the D.XII, while better than the D.III, could not compete effectively with the D.VII, and always remained an “also-ran”. It had its weaknesses, including the main landing gear, which had a tendency to collapse during any heavy landing, and its complexity did not endear it to maintenance personnel. In short, pilots preferred the D.VII. Although many more were ordered, probably only 100 were actually built, and many survived the conflict to be distributed among the Allies as reparations. Several came to the USA, and were used in movie work in the late twenties, and four originals survive, at the NASM (Washington, DC), Australian War Memorial (Canberra, ACT) , the French Air and Space Museum (Paris), and the Museum of Flight (Seattle, WA). In addition, at least one replica has been built, this one done at Phoenix’s Deer Valley Airport, AZ. This was built with the idea of flying it, but it has reportedly been sold to a museum in Germany, where it is destined to become a static display. It is illustrated in this review, as I was invited to photograph it upon its rollout in August, 2009. I was hoping to see it fly, but the management at Deer Valley frowned upon the use of their paved runway by a plane equipped only with a tailskid, and a tailwheel would have destroyed the authenticity of the replica. Not very sporting chaps, these. 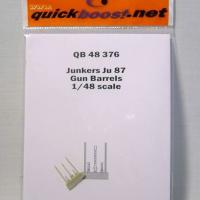 The Barrels in the sample are perfectly molded in resin. The details are sharp and the edges on the ends are thin and crisp.

I would recommend this Quickboost product to all model builders.

I would like to thank Quickboost for the sample and IPMS/USA for the opportunity to conduct this review. 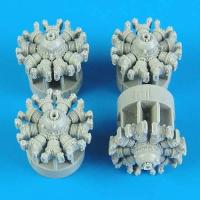 The Quickboost line of after market parts just keeps growing and growing. This time they’ve done the Revell B-17G flying fortress engines. I was really excited when I saw that they were up for review because I had just purchased Revell’s new B-17G. Once the engines arrived I dove right in and started looking at the engine instructions and noticed that something just didn’t look right. I found out that the Quickboost parts are for the OLD Revell B-17G kit, not the new one. The engines in the new kit have been totally redone and have quite a few more steps to them than their older version. I went to Revells’ web site and checked the instruction sheet for the older version of this kit and also included the instructions for the newer kits engines. I didn’t have one of Revells’ older kits but I did have a Hasegawa B-17G in my stash. 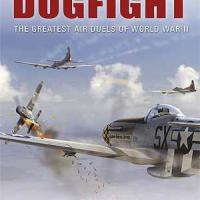 I was expectingthe usual Osprey soft cover book; I was surprised how heavy the package was from IPMS reviewers’ corps headquarters. The book is 300+ pages. It appears that this book is a compilation of previous vs. series, although I have not read the individual titles myself so I can’t say for sure. Tony Holmes is the editor of this compilation as well he contributes the Spitfires vs. Bf 109E covering the epic “Battle of Britain” during the summer of 1940. Below is the table of contents: 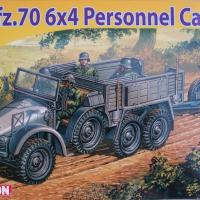 Krupp’s Kfz.70 light truck was a workhorse for the German army throughout WW II. Initial production started in 1933 and continued through 1942 with a run of around 7000 units. It was often employed towing light artillery, particularly the PaK 35/36, 3.7cm anti-tank weapon. Dragon has released a kit of this ubiquitous vehicle in 1/72 scale and it’s a little gem. Molded in light gray plastic, the kit features highly detailed parts for both the truck and the towed cannon. The wood grain simulation on the side panels of the truck is noteworthy. Dragon provides decals for three versions, all from unknown units on the Eastern Front circa 1943. One is in winter camouflage. The instructions are typical for Dragon with exploded views showing eleven steps to complete the truck and two steps for the cannon. The last page is a painting and decal guide with color references keyed to Gunze Sangyo paints.