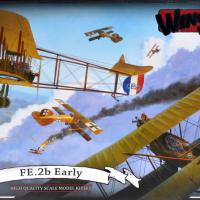 The nacelle went together with no issues. First, the inside was masked and painted a combination of aluminum, wood, and CDL (Clear Doped Linen, for which I used Tamiya Buff acrylic). Don’t forget to drill the appropriate holes in the nacelle sides for the version you are building. The bottom seam wass covered by the armor plate floor and the remaining seams were easily dealt with. The assembly was masked – engine and cockpit – and sprayed with Tamiya rattlecan OD, which dried quickly and hard. I decided to leave the landing gear assembly and the nacelle MG mounts off until after the wings were mounted and rigged. Otherwise, I would surely break something off.

I prepped all of the wing parts – sections, middle, and ailerons – and painted them OD and CDL as above. Then I masked the walkways and sprayed them with Tamiya spray can Aluminum. I highlighted and darkened the treads with a #2 pencil. The metal hardware fittings on the wings were picked out with Tamiya X-18 semi-gloss black and a small brush. I tried a toothpick on the smaller bits, but found the brush worked better for me.

Once the wings were dry, I coated them with Future and applied the decals. Memory is a fragile thing. On my other Wingnuts Wings kits, of which I’ve built three, the decals appear pretty thick, and are. But they go down very well and are best handled by pressing them down with a soft cloth after they have been nudged into position. Even though thicker than many decals, they settle down very nicely. I had a couple of areas where I didn’t press down enough and they did not glue to the Future coat, so being old and forgetful, I hit those areas with Solvaset. Don’t do that. As you can tell from the photo of one of the aileron decals, this causes Wingnut Wings decals to bubble. Bad juju. Trust the instructions.

At this point, the wing struts only await the final oil paint treatment to disguise them as wood instead of plastic, with the metal fittings painted black and positioned in the sockets to mount the top and bottom wings. Then, I somehow managed to keep my paws off long enough to let it dry, using the model’s box as the wing alignment jig (pretty clever, those Nuts), and it was time for EZ Line.

Although I have had life intrude and put me behind schedule in this build, I can testify that it will be a long build in any event. It appears now that there are two major assemblies to deal with, almost amounting to two separate builds – the “front.” consisting of the nacelle, landing gear, wings, and rigging, and the “back,” consisting of the two long tail booms and rudder and elevator assemblies, which require probably more rigging than the wings.

Oh, yeah, then there is the control wire rigging that goes on after the structural rigging is complete. Going to be one impressive model when it is finally done. Thanks to Wingnut Wings for the kit and to IPMS/USA for the opportunity so far.