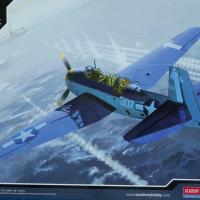 The US Navy’s most widely-used torpedo bomber of World War II, the Grumman TBF Avenger, filled a critical gap in combat capability shortly after the United States’ immersion into the war. The Grumman TBF’s and license-built General Motors TBM’s replaced the aging and obsolete Douglas TBD Devastator. Avengers operated in a host of roles through 1954, including torpedo bomber, level bomber, and anti-submarine duties.

Academy proudly rolls out the first of its recently licensed Accurate Miniatures (AM) classics in the form of the TBM-3 Avenger. First introduced to the market under the Accurate Miniatures brand in 1996, this kit is truly a “Sweet 16” (year-old) work of art. The hallmark AM tooling’s detail and precision rivals that of Tamiya’s, with exceptional fit and minimal fuss.

Once the box cover sporting snappy new box art is lifted away, the modeler is greeted by 10 trees of exquisitely molded parts, including one of crystal-clear canopy, ball turret, and light lens pieces. Decals for two aircraft, one from USS Bunker Hill the other from USS Essex, are printed by Cartograf. The instruction booklet rounds out the box contents and is, frankly, the only disappointment in the whole ensemble. David Doyle’s TBF/TBM Avenger in Action from Squadron/Signal was an essential resource in proper placement and painting of numerous parts and assemblies.

Aside from the lacking legacy of AM instructions, although spruced up with a current color reference chart, the build was a true pleasure – and lots of it! Crisp detail and near-perfect part fit and alignment made assembly a breeze and painting and weathering a matter of textbook form.

The engine is nicely detailed and includes separate gearbox and ignition ring and wires. Engine mount structure and detail is provided for those wishing to super-detail the space between the cockpit and engine compartment.

Although no provisions are made for folding wings, interior landing flap detail is provided if the modeler chooses to cut out the flaps and position them in landing configuration. I chose to leave them in the retracted position, as no instances could be found of them lowered on-deck in dozens of available reference photos.

In painting and finishing the review sample, Italeri acrylics were used over Tamiya Fine White Primer for all but the silver on the propeller spinner and the yellow on the engine cowl band. Eduard pre-cut masks were a sanity-saver in prepping the clear parts for paint. Minwax Acrylic Gloss thinned 50/50 with distilled water was applied for the decal base, and a 75/25% mix of Model Master Acryl Flat and Future sealed the deal.

The Cartograf decals are simply amazing. Bright, crisp, in-register, and ultra-thin, they go on as well or better than any decals I’ve applied in over 40 years of modeling.

I must have spent nearly 40 hours on this project – many of them late at night and in a somewhat catatonic state – and she still turned out beautifully (in my humble opinion). In a more alert state, the build would’ve likely taken only 25-30 hours.

I highly recommend Academy’s re-pop of Accurate Miniatures’ classic TBM-3 Avenger for modelers of all skill levels, although I do also highly recommend a good reference such as Mr. Doyle’s TBF/TBM Avenger in Action be nearby for quick and complete reference.

Many thanks to MRC for the sample kit and to IPMS/USA for the opportunity to build and review it.