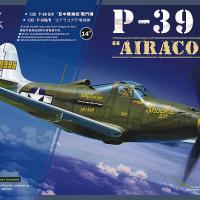 The Bell P-39 Airacobra is one of the most distinctive looking and interesting aircraft designs to be built in large numbers in the early years of World War II. It was designed by Bell Aircraft Corporation in the late 1930’s as a fighter interceptor with some very innovative features. The large V1710 Alison engine was located behind the cockpit, a 37mm cannon was mounted through the spinner shaft and rather than having a top opening canopy it was designed with car style doors.

This highly anticipated new kit from Kitty Hawk is the first kit of this awesome fighter in 1/32 scale that is not a short run kit. This boxing includes parts to build either the Q or N variants which saw extensive service with the Soviet Union and the Pacific Theater.

The parts for this kit are molded in light grey styrene and the molding of the surface detail is fantastic. The panel lines, rivets and hatches are well detailed but not out of scale. My only issues with the moldings are that there seems to be a surprising amount of flash for such a new kit and there a lot of ejector pin marks, many of them in locations where it seems like they could have been avoided. This only becomes a problem on some of the interior parts for the most part and overall they are very easy deal with if you plan ahead. This kit also includes a small fret of photoetch for the seatbelts and some interior parts for the forward gun bay. Lastly, the clear parts are shipped in their own protective sleeve inside a cardboard box and are very clear and well molded.

Before I get into the build itself, I have a couple of comments on the instructions. They are highly detailed and well thought out as far as physically building the kit goes. However, as is the case with some other instruction sets by Kitty Hawk, there are a couple of small issues. There are two different aircraft variants that can be made from the parts in the kit. Unfortunately, the instructions only tell you what the options are and not which one to choose for the version you are working on. Specifically, the Q variant replaced the 0.303 caliber machine guns in the wings from the N variant with 0.50 caliber machine guns in gun pods under the wing. There is no information on this in the instructions and all of the painting diagrams show all of the airframes with both features of both variants installed at the same time. I also don’t quite agree with some of the paint call outs, so for the interior parts I used Tamiya XF-18 Medium Blue for the engine block, Tamiya XF-5 Flat Green for the interior color and the drive shaft should actually be copper not silver. For the exterior colors the underside color should be closer to Neutral Grey so I used a 80/20 mix of Tamiya XF-53 and Tamiya White and while the propeller blades are not give a color call out at all, on the Russian aircraft that I was building they should be black. I would highly recommend that you find color reference materials and information on the specifics of the variant for the aircraft you are building before you start.

Now on to the construction of the kit - the kit has some very cool options for construction. It includes parts for a full engine, the forward gun compartment and two aft compartments. All of these have panels on both sides of the airframe that can be posed open to show of the interior details. The construction of these parts and the kit starts with the nicely detailed engine. The fit of all the engine parts is very good. I left the exhaust pipes off for painting later and because I was planning on using the exterior panels to mask the interior during painting. Leaving the pipes off made this much easier. Next up is construction of the cockpit and the forward gun compartment. The photoetch belts are very easy to work with and really look the part once they are installed. The instrument panel is very nicely detailed but there is no photoetch option for it, instead there is a series of decals that you can apply to replicate the gauges. To my surprise the large decals actually settled down well over the panel details, but you will have to touch up or trim some of the edges of the decals as the black top part does not completely cover the white used for the details on all of the edges. The fit of the cockpit parts is very good and the completed cockpit really looks the part.

For the forward gun compartment, there really are a lot of parts that go into a tiny space. Overall the engineering and fit in this part are quite good. I did not really like how the yellow air bottles fit into the center frame but with a little bit of filling and sanding before painting and I was happy with the result. Also, it is extremely important that you install part D7, which is part of the drive shaft and as I mentioned above, should be copper not silver, when the instructions tell you too. If you wait until after parts C22/C48 are installed like I did, then you will have a very hard time fitting D7 without modifying it. I did have a hard time fitting the subassembly “D-D”, as the directions are little vague on how the middle set of legs (H-13) should touch the bottom plate between the air bottles. I recommend assembling this subassembly and letting the glue set completely before trying to install it. The last thing to build before the main interior section is complete is the main landing gear bay. The bay is well detailed and fits well, the only thing to pay attention to is that the front section of the drive shaft runs through the front plate of the bay, the nose gear strut and into a hole in the top of the bay to connect with Part D7. This means that you really should install the main gear as instructed. I left mine out for ease of handling and painting so I had to modify the top end of the strut so I could install it at the end of the build.

Next we start to close up the fuselage. The large interior section fits very well into the main body of the fuselage. The only problem that I had at this stage was that the very center section under the seat had a nasty seam. A little putty and sanding handled the problem well. For the construction of the spinner, I left off part D33 and just glued the C9/C10 assembly in place. This allowed me to leave the spinner off until after final painting was complete. Another note on the instructions here, there are two types of cannons included but no guidance on which one to use for which aircraft. I think that D9 is for the Q version but check your references. There are two more issues that I wanted to mention before moving on to the wings. First, this model is definitely a tail sitter, with all of the interior components installed and the tall front landing gear. I had intended to add weight to the spinner but with cannon and the interior parts this did not work. So before installing D1/D6 make sure to add a few grams of weight to the interior of these parts. Also be careful when installing part E1 on the underside, as the fit isn’t great and it is very easy to push it all the way through into the interior of the fuselage. Lastly, be careful when installing parts D19/D22 and D1/D6. I was building the aircraft with the full interior for this review and I had a lot of trouble getting all four of these parts to fit over everything that I had installed. I ended up gluing the D19/D22 together and gluing their front edge to the kit then letting it set before gluing the back edge down. I also had to fill and sand around these parts because there were a fair amount of gaps.

Finally we come to assembling the wings and finishing off the build. The wings and rear landing gear are in general very, very good. The wing assembly is very straight forward with overall very good fit, just check your references to see if your aircraft has the wing guns or the gun pods. Be very careful with the tabs on the wings that you will use to attach the wings to the main fuselage, they can be easy to damage and that can complicate attaching them. But if they are intact they make it very easy to get the correct dihedral and get a very strong join. I had a small issue with installing the wings, there was a small gap that seemed to be caused by the centerline plate of the wheel wells (H40/H41), and so I opened up the indents where these parts fit into on the main fuselage. This seemed to help the issue, I also had a little bit of trouble getting A16/A15 to fit in a way that I was happy with but a little putty and sanding fixed that issue. The rear landing gear assembly couldn’t be easier and the way it is designed is great. There are two large tabs that slide into holes and notches in the gear bay. They fit great and form a really strong join.

The last thing to tackle is the painting and decaling. I chose to build option C for a Russian P-39Q with very cool playing card markings. As I mentioned above I used a custom Tamiya mix for the Neutral grey, followed by Tamiya Olive Drab and for the Blue I used 75/25 mix of Tamiya X-4 and Tamiya White. There are seriously a lot of decals on this aircraft, as there are a ton of little stencils everywhere. I had mixed results working with decals. I laid them down over a couple of heavy coats of the new Pledge Floor Care and the large decals performed great. They have great color and register and laid down nicely. But a lot of my tiny stencils silvered, so I would recommend floating them down into puddles of Future or using a different gloss coat. The PFC seems to gloss OK but not great and unlike the original Future, it does not seem to self-level.

Overall, this is a fantastic kit. The detail is great and the options that are provided for a full interior are great. I can see some awesome build potential for super detailers with this kit. A couple of years ago I built the Special Hobby version of this aircraft and this kit from Kitty Hawk is head and shoulders above the Special Hobby kit. With the full interior I would not recommend this kit to beginners but anyone with a few kits under their belt should have no trouble getting something they are very happy with out of this kit.

Many thanks to Kitty Hawk for the review sample and thank you to IPMS USA for the chance to review it.