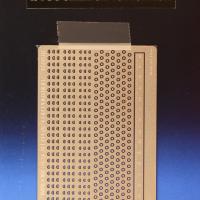 Lion Roar has produced an ideal product for superdetailers: a value-priced set of 1/700 scale (late-war) porthole covers and “eyebrows” for portholes (hull and superstructure) for Imperial Japanese Navy warships.

Lion Roar photoetch set R7038, 1/700 WWII Imperial Japanese Navy Ship Windows & Sealed Cap for Portholes, does not actually contain any windows or portholes. The title for this set was obviously mangled in translation into English. This set has three sizes of “eyebrows” that are meant to be placed over portholes of various sizes and caps used to cover portholes later in WWII. Eyebrows are called rigols or rims in naval parlance, and they are an arc-shaped trough that goes around the upper third or half of a porthole (round scuttle) or window to prevent water running down the hull or wall from entering the porthole. Caps were used to reduce the risk of light escaping from a porthole and to assist damage control by removing a portal of entry for water when porthole glass was shattered by an explosion.

The set is made from steel and is backed by a clear adhesive film that holds the eyebrows and caps in place. There is nothing to cut with this set, a boon for such tiny pieces. A very helpful tool is included: an 80 mm steel mini-rule with notches every millimeter. This ruler can be used to mark portholes precisely for later drilling out or capping. This tool is very helpful for redoing portholes. Why would one need to do that? They may need to be added when working on a kit that does not have portholes, when superdetailing, or when one fills in and sands down the portholes because they are poorly positioned, mis-positioned, or out of line. You would be surprised how many kits botch the porthole number and locations. Just use a sharp pin to mark the spot, and drill out with a pin vise. A #76 size drill bits work best for 1/700 scale portholes in my opinion. Finally, fill them in with India ink from a drafting pen—using a 0.25 or 0.30 tip—or a brass or plastic rod dipped in black paint.

I’m pleased to note that the upper (non-sticky) side of the pieces has very finely etched surface detail—rivets! Thus, it’s very important when removing these miniscule pieces that you ensure that you keep the riveted side up in order to have it showing on the model. The other side is flat and rivetless.

This set was one of four WWII IJN photoetch sets to review simultaneously, two of them specific to Aoba-class cruisers. Since porthole caps were used for late-war IJN warships, this set was used to outfit a complete remake of Aoba, which survived until the late July 1945 massacre of IJN port-bound ships by US naval aircraft attacks. I had a very old Hasegawa #054 kit of the Aoba in its late-war fit purchased over 30 years ago. First of all, this older Hasegawa kit of Aoba is not accurate; it gets the general layout correct for a late-war fit (1944 and later), but there are many details that are wrong. It is imperative to get the right authoritative references. The best is the excellent Kagero Publishing book Heavy Cruiser Aoba (see References at end of this review for details). This book has minimal text (English!) and photographs, but it is mostly super-detailed 3D drawings that are better than photographs or plans. I used this book as a guide, trusting the authors to have gotten the details correct. I also confirmed the appearance as much as possible with other references, including a Japanese book I picked up on a business trip to Tokyo long ago, Mechanism of Japanese Heavy Cruisers.

Armed with the facts, this kit has the wrong number of hull portholes and they are in the wrong locations. Rather than fill in and redrill almost 100 portholes per hull side, I opted to make do with what was available, and add caps to the bare hull to at least match the correct number of portholes. I did fill 13 portholes on the port side amidships with putty and sanded them smooth. I sanded the hull smooth, which is a problem for some kits that have eyebrows molded on, and you need to decide if you want to keep them (no sanding required) or replace them (plenty of sanding required). If you get overzealous with sanding, some portholes will need to be redrilled to deepen them.

Portholes with caps generally did not have rigols. To attach the caps, I found that the easiest way was to use CA gel glue and apply a tiny drop to the porthole (or hull spot) with the tip of a pin or other sharp, pointy object (dental tools work too). Then I used the tip of a #11 X-Acto knife blade to pick the cap off its adhesive backing, taking care to put the flat bottom side on the glue. Yes, very tedious, but after a while one gets a knack for removing the cap and applying it without losing it or having the glue dry out before you can place the cap. Be careful not to overindulge on the gel glue. Although almost nobody would ever know the caps have rivet detail, it looks good if either side is used (which was done a few times accidentally—I blame poor lighting) but even better if the rivet side is up—if you are looking for it.

Same procedure for the eyebrows, except a thick CA glue worked better than the gel, which was too thick to apply in the necessary small amount. Regular thin CA glue dried too quickly to be practical, unless you are the Flash. Even these tiny rigols have rivet detail! It took about 2 hours per hull side to add caps and eyebrows.

The attached images show closeups of the starboard forward hull of my Aoba before, during, and after completion. I’ve also included a comparison image of the same position on another model of an IJN heavy cruiser (Nachi) without caps or rigols. Close-up, the caps and rigols look much better even if superfine detail is not evident. I’ve also included comparison images showing the full-length, normal viewing distance view of Aoba and Yahagi starboard sides. Comparing the two models, porthole caps are easily evident, but rigols on hull or superstructure are hard to see. This comparison tells me that rigols should be reserved for contest entrants or those who prefer superdetail even if nobody notices.

Table 1 compares some of the available photoetch sets of porthole caps as major or only pieces, comparing features and cost. Actual prices of photoetch sets vary widely, thus the calculated cost per cap may be different than listed here. Although Lion Roar R7038 set looks more expensive per cap than others, you also get riveted rigols and the metal millimeter ruler not found in other kits.

Riveted rigols and porthole caps accurize late-war IJN warships. While they may not be obvious, they add to the overall impression of superdetailing and attention to detail. While working with this set, I compiled a list of my pros and cons.

I highly recommend this set for accurizing and superdetailing 1/700 scale IJN warships, especially late-war versions with porthole caps. The value is affordable for outfitting an individual ship or an entire collection. Rats! I have to redo all my older builds yet again. This set is not for those that have trouble with eyesight or very tiny pieces, and recommended for medium to advanced modelers. The end result is excellent and adds that superdetail look to models.

I would like to thank Dragon Models USA for providing this set for review, and I would also like to thank IPMS/USA for the opportunity to review it.

Hasegawa 054 Aoba starboard forward hull after caps and rigols, but before completion of model.

Hasegawa 006 Nachi starboard forward hull after completion (minus turrets) without caps or rigols, as a comparison to the finished Aoba

Tamiya 063 Yahagi full length photo without caps or rigols at normal viewing distance for comparison with completed Aoba.
Previous Next