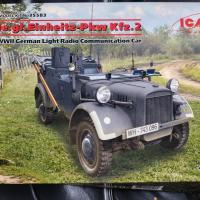 Manufactured by the Stoewer Company, as well as BMW and Hanomag since 1936, the light uniform all-road car (leichten gelande Einhets Personen-Kraftwagen) possessed all-wheel drive, independent suspension, and a simplified open body. This particular body, the Kfz.2, was a three-seat communication car with a Torn. Fu.b1 radio set.

The kit consists of 5 styrene sprues, one clear sprue, and a small sheet of decals that represent the four featured schemes in the kit. Construction begins with the chassis, and over the course of the first thirteen assembly steps, you’ve handled 45 parts. Everything goes together pretty smoothly however.

The next thirteen steps have you assembling the engine and inserting it onto the chassis. It builds into quite a nice little kit all itself. Following that, we move onto the floor of the car, adding the fuel tank, bracket, rear reflector, and fuel tank nozzle. This is then added to the chassis.

Assembly of the wheels follows-- each made up of three parts. Installing them is a bit tricky-- you not only have to put them onto the axle, but also line up a top and bottom slot and this is not so easy to do as you can’t see so well to do it and if things aren’t installed exactly in place in previous steps, it is tricky. The radiator, firewall, instrument panel, and fiddly bits are next. Extreme care should be taken here-- the handles and pedals and such break very easily. Decals are included for the gauges which is a nice touch.

The side panels get added next and this was very fiddly as there are not the best attachment points to assemble things together. It was a bit of a guessing game. They then have you add the partition for the rear seat and the rear panel. The three part hood fits quite nicely in place over the engine and has great detail. The front seats and fenders are next. The seats lack detail and one of the seat back’s inner face had a hard to reach sink mark inside. A three part brush guard and bumper assembly is next, followed by three Kar 95 rifles to be placed in the three crew positions. The gear lever is added here as well, but was snapped in half on the sprue...so I replaced it with wire.

Doors, rear deck, windshield, and steering wheel come next. The windshield sort of lays on top of a groove, so you have to decide if you want it in place or laying down. A four part folded canopy is next and lays nicely on the rear edge of the car. The radio set and cabinet is then added to the deck. A few decals can be added to the dials. My only complaint is that one would think there would be a headset of some sort included in the kit-- it is difficult to use a radio without one. I’ll grab a set from the spares to fill in this needed detail as soon as I find one. There are parts for either a long or short rear antenna. After adding all the rear fiddly bits (rear lights, license plate, etc), we add the tools, headlights, side mirror, and other small bits. The wipers ended up flying off into the ether when I tried trimming off the sprue bits...so I laid my windshield down to hide their absence. At this, construction is done.

As mentioned before, there are four schemes in the kit. Three are in Panzer Grey with one based in France and two in Russia, I chose the fourth scheme, a DAK scheme from the Ramcke Brigade based in Libya. I used a Krylon primer gray for the base coat, and then a coat of hairspray. I then sprayed on a custom mix of Tamiya paints for the desert yellow. I then used an old toothbrush with water to wear down to the primer coat where sand may have been kicked up to damage the paint. I didn’t use too many decals in this scheme, but what I did use went on smoothly. I finished weathering by applying some oil paint rendering and AMMO washes and pigments.

This was a nice little kit that went together pretty smoothly. I would’ve liked to have seen some figures, but there are some pretty good sets from Dragon and Master Box that fit the bill. Other than the lack of true attachment points for the cab sides and no headgear for the radio set, I would heartily recommend this kit to anyone looking to add to their German arsenal. I am grateful to ICM and IPMS-USA for the review sample.