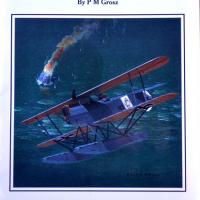 Worldwide interest in Wingnut Wings’ announcement of a new 1:32 scale Brandenburg W12 floatplane kit along with Copper State Models recent 1:48 scale kit releases have prompted Albatros Productions to offer model builders a limited edition reprinting of its long-out-of-print Datafile 61 covering the Brandenburg W12. It is one of three reprints of Datafiles covering WWI floatplanes to be announced this year.

The Brandenburg W12 was known as the ‘Kamel’ (or Camel). It was a two-place biplane, powered by the 160 hp Daimler-Mercedes D.II engine, equipped with twin-floats and offering its crews the performance needed to take on the Brit’s big Felixstowe floatplanes without hesitation. Its design features were influenced by technical data shared between Phonix, UFAG and Hansa-Brandenburg which resulted in a broad plywood fuselage and a low-profile tail fin and rudder that provided good protection for its crew and a wide field of fire to counter attacks coming from most any direction. Early versions featured a short fuselage that was lengthened in later models that also featured redesigned cabane struts and ailerons on the lower wing for improved performance. A total of 146 W12 seaplanes were built and they provided the German navy air service with a much needed two-seat fighter seaplane that delivered sufficient fighting power, range, performance and speed to intercept and engage Britain’s larger and more powerful flying boats.

Albatros Productions and the author Peter M. Grosz provide the complete story of the Brandenburg W12 in Datafile 61. The author is a world-renowned expert on German Aircraft with great knowledge of Brandenburg float plane fighters and, in this 36-page book, he delivers a complete historical narrative, enhanced with a dramatic color illustration by Bryan Knight on the front cover, 54 period photos, five pages of original Brandenburg factory drawings, three-color profiles by Ronny Bar, and nine pages of 1/72 and 1/48 scale drawings of early and late versions of the aircraft (with scrap drawings) by I. R. Stair. In addition, information is provided about German naval camouflage colors, including both “Blue” pattern and “Brown” pattern lozenge printed fabrics. Appendices are included listing orders and deliveries as well as a listing of Brandenburg W 12 kits that have been available in 1:72 and 1:48 scales.

This publication is highly recommended to WWI aircraft model builders, those with an interest in WWI aviation history and especially those interested in WWI float planes. Datafile 61 can be ordered directly from the publisher via the website listed above. My thanks to Albatros Productions for providing the review sample of this excellent publication and IPMS/USA for the opportunity to review it.