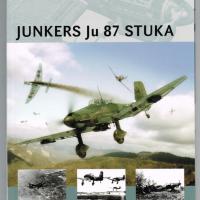 Junkers Ju 87 Stuka is number 15 in Osprey’s Air Vanguard series. What this book is not is a technical reference manual for model builders, with an abundance of drawings, walkaround photographs and full-color profiles. Rather, it is a general overview of the Stuka with a reasonable amount of period photos, artwork and a few color profiles that add to the story of how the aircraft came about and its roll as the Luftwaffe’s primary operational dive bomber. It should be of interest to those who don’t know a great deal about the aircraft or would like to have a quick study of the subject in a single publication. But, modeler builders who already have a number of good Stuka reference books in their library may not find this book a necessary acquisition.

Author Guardia begins the story just as the Nazis were coming to power and describes how the Stuka benefited from being the right aircraft at the right time for a military that planned early on to integrate attack aircraft, armor and troops into what came to be known as ‘Blitzkreig’. After chapters describing its design and development, technical specifications and sequential versions, the story of the Stuka focuses mainly on its operational use, beginning in the Spanish Civil War and continuing on until its eventual phase out.

In the About this book description on the their website, Osprey says: “In the opening days of the Blitzkrieg campaign, few aircraft could invoke as much terror as the Junkers Ju 87. Nicknamed the “Stuka” (an abbreviation of Sturzkampfflugzeug – the German term for “dive-bomber”), the Ju 87 was perhaps the most feared tactical bomber of the ETO. With its fixed landing gear and inverted gull wings, the Stuka was the most recognizable aircraft of the Blitzkrieg era. With profile plates, close-up photographs and battle scene artwork, this book reveals the design and development history of the aircraft and how the inclusion of its dive-activated siren changed it from a reliable and sturdy dive bomber into a psychological weapon, spreading panic in ground units. Mike Guardia goes on to explain how the Stuka became easy prey for Allied aircraft and how its influence waned in the final years of the war.”

The Contents of the book include:

Included in the book are 37 period (and museum) photos, 8 color profiles, a full-color aircraft 3-view, two full-page paintings of the aircraft in battle, a fold-out illustration describing airframe details and one depicting Stuka battle tactics. In addition, the Bibliography and Further Reading section at the end of the book provides other publications that can add much to the full story of the Stuka.

This book is recommended to those interested in a general overview of the development and operational service of the Junkers Ju 87 Stuka. My thanks to Osprey Publishing for providing the review sample and IPMS/USA for the opportunity to review it.