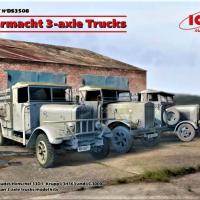 ICM has recently started a trend of boxing several different kits under a single title, a useful way of boosting sales of certain items in their inventory. One such boxing is the “Wehrmacht 3-Axle Trucks” set, which includes three different heavy truck kits of various vintages. Personally, I like this trend, as it provides the modeler with a host of material to work with at a relatively low price. Perhaps the only downside to the marketing for this specific set is the cover art, which is perhaps the dullest model box top I’ve ever seen.

As stated before, the three kits were originally released separately at various times, and to a certain degree the age of the original kit impacts its buildability, as the later kits are certainly easier to assemble than the earlier, although all of these are fairly intensive builds and will sometimes tax the skills of the average modeler. All three feature extended cargo bay extender slats, canvas cabin hoods and excellent engine details.

The oldest of the kits is the Krupp L3H163, and it is perhaps the most challenging. This is also the only one of the three kits which offers display options for the engine via a foldable hood design. It provides plastic tires and positionable steering, which I personally prefer. It also has, unfortunately, some extremely challenging assemblies – the multi-piece rear axles being particularly trying. Even when done correctly, this assembly offers a very weak structure that is prone to breakage with even moderate handling. In my case I had all four of the wheel assemblies break off at least once during the build process. If I were making this kit again, I would probably replace the plastic axle rods with metal. There is also a little flash to contend with, which is mostly absent from the newer kits. Other portions of the assembly proved challenging as well, but nothing a good modeler should not be able to handle with a little caution.

The second oldest kit is the Henschel 33 D1, and this one also features plastic wheels and positionable steering. It also offers excellent engine detail but does not provide a way to display it accurately in a diorama setting. The undercarriage on this kit is equally complex but isn’t nearly as fragile as the Krupp design. Once again, this is a fairly intensive build requiring a fair amount of care, but nothing most modelers should not be able to handle.

The newest kit, the Mercedes LG3000, is a bit different in that it provides vinyl tires. However, the steering is now no longer positionable. It has by far the most detailed engine -- right down to separate spark plugs -- but once again does not offer a foldable hood to show this lovely detail off properly. As with the others, caution must be used during assembly as ultimately all three kits make fairly fragile constructs which are subject to breakage, especially during the painting process.

In an effort to show the versatility of this multi-kit set, I decided to step outside the usual bounds of review builds and show some of the simple modifications possible. The Krupp truck was simply painted up as an Afrika Korps vehicle for a little visual distinctiveness. I went further with the Hensel and modified it into a Luftwaffe field defender by adding an anti-aircraft gun in the cargo bay and dropping the windshield to provide a broader field of fire. The Mercedes was built as a post-war civilian vehicle, which mostly meant leaving off various military modifications during assembly. Obviously, there a lot more things that can be done with these kits, but I just wanted to provide a hint at the possibilities.

All in all, I really enjoy these multi-kit sets as they grant you an enormous amount of modeling pleasure in one package. They also give you quite a lot of modeling bang for the buck, and make it easy to expand your collection, whatever your interests may be. Despite the challenges, I thoroughly enjoyed building these little gems, and once these are thoroughly tricked out with appropriate baggage, etc., they will be finding their way into a number of dioramas. ICM is onto a good thing here, and I hope they continued adding to these series. Highly recommended.

Thanks to ICM for providing the review kit, and of course, thanks to IPMS/USA for a chance to tackle these. Stay safe, everyone, and happy modeling!